The Columbia History of the Vietnam War 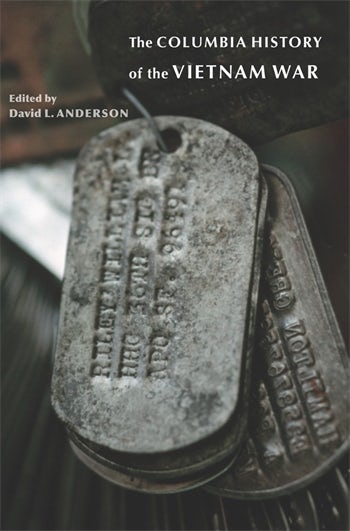 The Columbia History of the Vietnam War

Rooted in recent scholarship, The Columbia History of the Vietnam War offers profound new perspectives on the political, historical, military, and social issues that defined the war and its effect on the United States and Vietnam. Laying the chronological and critical foundations for the volume, David L. Anderson opens with an essay on the Vietnam War's major moments and enduring relevance. Mark Philip Bradley follows with a reexamination of Vietnamese revolutionary nationalism and the Vietminh-led war against French colonialism. Richard H. Immerman revisits Eisenhower's and Kennedy's efforts at nation building in South Vietnam, and Gary R. Hess reviews America's military commitment under Kennedy and Johnson. Lloyd C. Gardner investigates the motivations behind Johnson's escalation of force, and Robert J. McMahon focuses on the pivotal period before and after the Tet Offensive. Jeffrey P. Kimball then makes sense of Nixon's paradoxical decision to end U.S. intervention while pursuing a destructive air war.

John Prados and Eric Bergerud devote essays to America's military strategy, while Helen E. Anderson and Robert K. Brigham explore the war's impact on Vietnamese women and urban culture. Melvin Small recounts the domestic tensions created by America's involvement in Vietnam, and Kenton Clymer traces the spread of the war to Laos and Cambodia. Concluding essays by Robert D. Schulzinger and George C. Herring account for the legacy of the war within Vietnamese and American contexts and diagnose the symptoms of the "Vietnam syndrome" evident in later debates about U.S. foreign policy. America's experience in Vietnam continues to figure prominently in discussions about strategy and defense, not to mention within discourse on the identity of the United States as a nation. Anderson's expert collection is therefore essential to understanding America's entanglement in the Vietnam War and the conflict's influence on the nation's future interests abroad.

[A] brilliantly edited anthology featuring a wide variety of essays by the finest experts in the field.... Essential. Choice

An accessible and coherent account of the war's course, from before the United States' involvement to the North's eventual victory. Lawrence D. Freedman, Foreign Affairs

Essential reading. Masterfully written by the most prominent authorities on the Vietnam War. Shelton Woods, Journal of World History

A timely book with contemporary relevance, published at a time when America's experience in Vietnam continues to figure prominently in discussions about strategy and defense.... Highly recommended. James H. Willbanks, Parameters

The major attraction of this volume is its winning combination of accessibility, authority, and intellectual depth. The editor should be congratulated for assembling a collection that should appeal across a wide spectrum of readers, from advanced college students to those with more expert knowledge on the war, who are looking for fresh insight or a cogent summary of an extensive literature. Matthew Jones, Journal of American History

David Anderson and Columbia University Press have published an important addition to Vietnam War literature. It is strongly recommended for all scholars and students of the Vietnam War and should be included in all academic libraries with an interest in this area. Peter Bush, The Journal of Military History

[An] invaluable study. The Scotsman

With its sterling lineup of scholars, The Columbia History provides keen insights into the history of the war in Vietnam that are accessible to a broad readership and informative we grapple with current wars. R.V. Lee, Vietnam

The invaluable Columbia History of the Vietnam War offers cautionary lessons even as our nation fights three wars and continues planning for and spending enormous amounts for our inevitable future wars. Murray Polner, History News Network

David L. Anderson is professor of history emeritus at California State University, Monterey Bay, and past president of the Society for Historians of American Foreign Relations. His books include Trapped by Success: The Eisenhower Administration and Vietnam and The Columbia Guide to the Vietnam War.