The Dawn That Never Comes 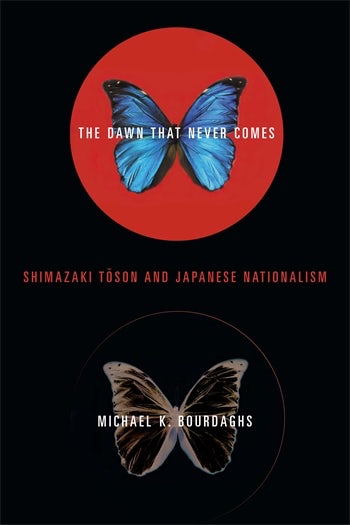 The Dawn That Never Comes

A critical rethinking of theories of national imagination, The Dawn That Never Comes offers the most detailed reading to date in English of one of modern Japan's most influential poets and novelists, Shimazaki Toson (1872–1943). It also reveals how Toson's works influenced the production of a fluid, shifting form of national imagination that has characterized twentieth-century Japan.

Analyzing Toson's major works, Michael K. Bourdaghs demonstrates that the construction of national imagination requires a complex interweaving of varied—and sometimes contradictory—figures for imagining the national community. Many scholars have shown, for example, that modern hygiene has functioned in nationalist thought as a method of excluding foreign others as diseased. This study explores the multiple images of illness appearing in Toson's fiction to demonstrate that hygiene employs more than one model of pathology, and it reveals how this multiplicity functioned to produce the combinations of exclusion and assimilation required to sustain a sense of national community.

Others have argued that nationalism is inherently ambivalent and self-contradictory; Bourdaghs shows more concretely both how this is so and why it is necessary and provides, in the process, a new way of thinking about national imagination. Individual chapters take up such issues as modern medicine and the discourses of national health; ideologies of the family and its representation in modern literary works; the gendering of the canon of national literature; and the multiple forms of space and time that narratives of national history require.

a strikingly original work of remarkable erudition that is also a rigorous theoretical practice...a book that speaks widely to literary and cultural critics and is also a must read for scholars of nationalism and Japanese modernity. James A. Fujii, The Journal of Asian Studies

His insightful and informative book has deepened our understanding of a highly influential but sadly still neglected Japanese writer....That said, Bourdaghs has certainly opened my eyes to ways of reading Toson I had not considered before, and he is to be thanked for that. Stephen Dodd, SOAS, University of London, Journal of Japanese Studies

In its originality and theoretical sophistication it revolutionizes both the study of Toson and the study of Japanese nationalism. Janet A. Walker, Rutgers University, Harvard Journal of Asiatic Studies

Introduction
1. Toson, Literary History, and National Imagination
2. The Disease of Nationalism, the Empire of Hygiene: "The Broken Commandment" as Hygiene Manual
3. Triangulating the Nation: Representing and Publishing "The Family"
4. Suicide and Childbirth in the I-Novel: "Women's Literature'" in "Spring" and "New Life"
5. The Times and Spaces of Nations: The Multiple Chronotopes of "Before the Dawn"
Epilogue. The Most Japanese of Things

Michael Bourdaghs teaches in the department of East Asian languages and cultures at UCLA. He is the translation editor of Kamei Hideo's Transformations of Sensibility: The Phenomenology of Meiji Literature.