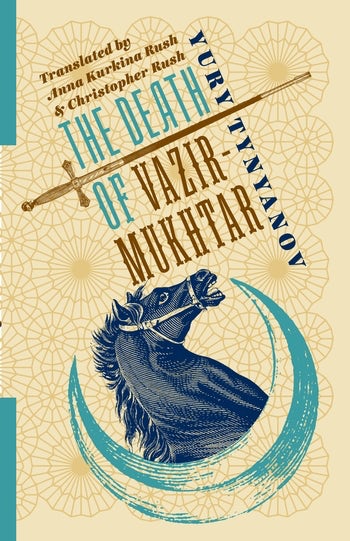 The Death of Vazir-Mukhtar, a novel by Yury Tynyanov, a leading figure of the Russian formalist school, describes the final year in the life of Alexander Griboedov, the author of the comedy Woe from Wit. As ambassador to Persia, Griboedov was savagely murdered in Tehran in 1829 in an attack on the Russian embassy.

The novel is not only one of the central texts of Russian formalist literary production but also a brilliant meditation on the nature of historical and poetic consciousness and on literary creation. It is a complex and fascinating work on the nature of the relationship among individual memory, historical fact, and the literary imagination. The result is a hybrid text, containing elements of literary biography, the psychological existential novel, and the spy novel, and a deeply personal, almost confessional work about the relationship of the writer to his generation and the state. Written in 1927 and 1928, almost a century after the events it depicts, The Death of Vazir-Mukhtar bridges two watershed periods between revolution and reaction. At a time when the Soviet regime was becoming increasingly restrictive of freedom of expression and conscience, Tynyanov examined themes of disillusionment, betrayal, unrealized potential, and wasted talent. Unabashedly intellectual yet full of intrigue and suspense, The Death of Vazir-Mukhtar is one of the great historical novels of Russian modernism.

The well-known formalist literary scholar Yury Tynyanov was a master of form. In bracing prose style, his novel The Death of Vazir-Mukhtar dives deeply into the life of the Russian poet Alexander Griboedov and Russian cultural and political history. This translation by Anna and Christopher Rush brings the reader every unexpected turn of Griboedov’s life and thoughts. Sibelan Forrester, Swarthmore College

Yury Tynyanov (1894–1943) was an influential literary historian, scholar, critic, and theoretician of the cinema. He was a leading member of the formalist group before achieving renown as a writer of historical fiction. His works include two other literary biographical novels on Pushkin and Küchelbecker as well as a number of short stories and novellas.