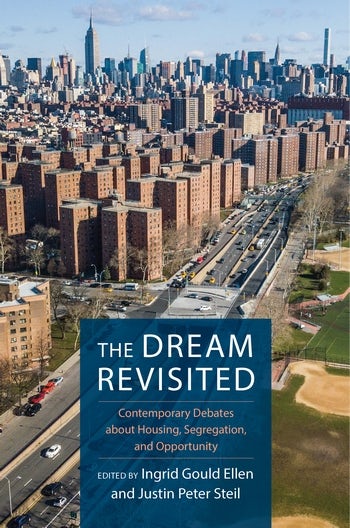 A half century after the Fair Housing Act, despite ongoing transformations of the geography of privilege and poverty, residential segregation by race and income continues to shape urban and suburban neighborhoods in the United States. Why do people live where they do? What explains segregation’s persistence? And why is addressing segregation so complicated?

The Dream Revisited brings together a range of expert viewpoints on the causes and consequences of the nation’s separate and unequal living patterns. Leading scholars and practitioners, including civil rights advocates, affordable housing developers, elected officials, and fair housing lawyers, discuss the nature of and policy responses to residential segregation. Essays scrutinize the factors that sustain segregation, including persistent barriers to mobility and complex neighborhood preferences, and its consequences from health to home finance and from policing to politics. They debate how actively and in what ways the government should intervene in housing markets to foster integration. The book features timely analyses of issues such as school integration, mixed income housing, and responses to gentrification from a diversity of viewpoints. A probing examination of a deeply rooted problem, The Dream Revisited offers pressing insights into the changing face of urban inequality.

[The Dream Revisited] is probably the most intelligent and thoughtful read on segregation in recent years. Despite highlighting so many debates and differences, I consider it a hopeful and useful policy tool. Anne B. Shlay, Georgia State University, Journal of Urban Affairs

This book would be a great supplementary text for courses in planning, housing, sociology or geography. Not only does the book help us to understand the complexities of segregation and ways to deal with it, but just as important, Ellen and Steil show us how much we can learn from conversations with people with different viewpoints. David P. Varady, University of Cincinnati, Journal of Housing and the Built Environment

Likely to be the leading reference point for discussion and action for years to come, this must-read volume offers pointed debate among a who’s who of scholars and practitioners. One would need a small library to cover so much critical terrain half as well. More importantly, the dozens of diverse contributors are willing to squarely face fundamental questions about whether racial and economic integration is, in fact, worthwhile for America and, if so, how it can be achieved at a time of dramatic social and technological change. Xavier de Souza Briggs, Vice President, Inclusive Economies and Markets, Ford Foundation

The deep engagement and spirited debate found in The Dream Revisited make it a must-read for political leaders, housing advocates, and researchers seeking to understand the causes and consequences of segregation in America. Segregation anchors our nation’s schools, neighborhoods, and families in inequality. Through a wide range of perspectives penned by top scholars, Ellen and Steil’s volume helps us understand not only how we are divided but how we might finally address one of America’s most vexing problems. Matthew Desmond, author of Evicted: Poverty and Profit in the American City

Fifty-five years since Martin Luther King’s speech, racial and economic segregation persist. Why? The Dream Revisited is a compelling compilation of the most up-to-date research and policy debate on the most crucial question of our day: how to produce racial and economic equality. It is both a wonderful introduction to these intersecting fields and a great resource for scholars and students of these topics. Wendell E. Pritchett, Presidential Professor of Law and Education, University of Pennsylvania Law School

This well-organized book makes a significant contribution to recent research on housing segregation in the US. Choice

Ingrid Gould Ellen is the Paulette Goddard Professor of Urban Policy and Planning at New York University’s Robert F. Wagner Graduate School of Public Service and a Faculty Director of the NYU Furman Center for Real Estate and Urban Policy. She is the author of Sharing America’s Neighborhoods: The Prospects for Stable Racial Integration (2000) and coeditor of How to House the Homeless (2010).

Justin Peter Steil is the Class of 1942 Assistant Professor of Law and Urban Planning at the Massachusetts Institute of Technology. He is the coeditor of Searching for the Just City: Debates in Urban Theory and Practice (2009).