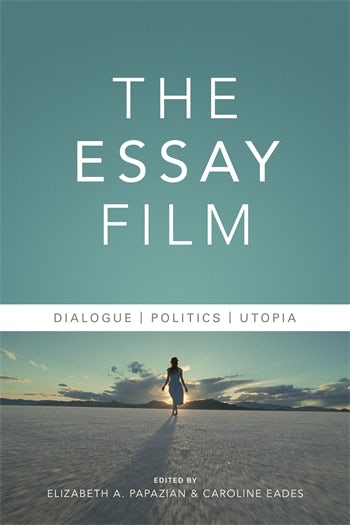 With its increasing presence in a continuously evolving media environment, the essay film as a visual form raises new questions about the construction of the subject, its relationship to the world, and the aesthetic possibilities of cinema. In this volume, authors specializing in various national cinemas (Cuban, French, German, Israeli, Italian, Lebanese, Polish, Russian, American) and critical approaches (historical, aesthetic, postcolonial, feminist, philosophical) explore the essay film and its consequences for the theory of cinema while building on and challenging existing theories. Taking as a guiding principle the essay form's dialogic, fluid nature, the volume examines the potential of the essayistic to question, investigate, and reflect on all forms of cinema—fiction film, popular cinema, and documentary, video installation, and digital essay.

A wide range of filmmakers are covered, from Dziga Vertov (Man with a Movie Camera, 1928), Chris Marker (Description of a Struggle, 1960), Nicolás Guillén Landrián (Coffea Arábiga, 1968), Pier Paolo Pasolini (Notes for an African Oresteia, 1969), Chantal Akerman (News from Home, 1976) and Jean-Luc Godard (Notre musique, 2004) to Nanni Moretti (Palombella Rossa, 1989), Mohammed Soueid (Civil War, 2002), Claire Denis (L'Intrus, 2004) and Terrence Malick (The Tree of Life, 2011), among others. The volume argues that the essayistic in film—as process, as experience, as experiment—opens the road to key issues faced by the individual in relation to the collective, but can also lead to its own subversion, as a form of dialectical thought that gravitates towards crisis.

The long-awaited news flash foregrounded by The Essay Film: Dialogue, Politics, Utopia is that cinema studies has at last parted ways with moldy, genre-based epistemologies. The idea of film-thinking as a philosophia sui generis that opposes formalistic classifications has been there from the get-go—in the hearts and minds of groundbreaking film-heretics. Here we are finally offered a thoroughly researched and carefully thought-out contemplation of the primordial desires and wishful prospects of the art of filmmaking, a distinct form of human expression. This book heralds an advanced phase of maturation for cinema studies. Its straightforward willingness to destabilize its own epistemic, aesthetic, and ethical dimensions, generating authentic terms-of-being, perfectly matches the true spiritual and intellectual scope of the essay film as we know it—and, more critically, as we can never truly know its inherently unknowable stratum. The clarity of this book's statement provides a firm foundation for future revelations the essay film holds in store. Dan Geva, Haifa University, and documentary filmmaker

This exciting collection promises to be an important milestone for ongoing debates and discussions about the emergent medium of interactive and nonlinear documentary. Matt Soar, Concordia University

Acknowledgments
Notes on Contributors
Introduction: Dialogue, Politics, Utopia, by Elizabeth A. Papazian and Caroline Eades
Part I: The Essay Film as Dialogue
1. Essayism and Contemporary Film Narrative, by Timothy Corrigan
2. Essaying the Forms of Popular Cinema: Godard, Farocki and the Principle of Shot/Countershot, by Rick Warner
3. The Practice of Strangeness: L'Intrus, from Jean-Luc Nancy (2000) to Claire Denis (2004), by Martine Beugnet
4. Cinéma-vérité and Kino-pravda: Rouch, Vertov, and the Essay Form, by Caroline Eades and Elizabeth A. Papazian
Part II: The Essay Film as Politics
5. Notes for a Revolution: Pasolini's Postcolonial Essay Films, by Luca Caminati
6. Chris Marker's Description of a Struggle and the Limits of the Essay Film, by Eric Zakim
7. A Woman with a Movie Camera: Chantal Akerman's Essay Films, by Anne Eakin Moss
8. 'What Does It Mean Today to Be a Communist?': Nanni Moretti's Palombella rossa and La cosa as Essay Films, by Mauro Resmini
Part III: The Essay Film as Utopia
9. Mohamed Soueid's Cinema of Immanence, by Laura U. Marks
10. Inside/Outside: Nicolasito Guillén Landrián's Subversive Strategy in Coffea Arábiga, by Ernesto Livon-Grosman
11. American Essays in How to Build a Home: Thoreau, Mekas, Proenneke, by Oliver Gaycken
12. 'to speak, to hold, to live by the image': Notes in the Margins of the New Videographic Tendency, by Luka Arsenjuk
Afterword: The Idea of Essay Film, by Laura Rascaroli
Index

Winner, 2018 Best Essay in an Edited Collection, Society for Cinema and Media Studies

Elizabeth A. Papazian is associate professor of Russian and film studies at the University of Maryland, College Park. She is the author of Manufacturing Truth: The Documentary Moment in Early Soviet Culture (2009).

Caroline Eades is associate professor of French and film studies at the University of Maryland, College Park. She is the author of Le Cinéma post-colonial français (2006).