The Risks, Benefits, and Uncertainties of the Shale Revolution 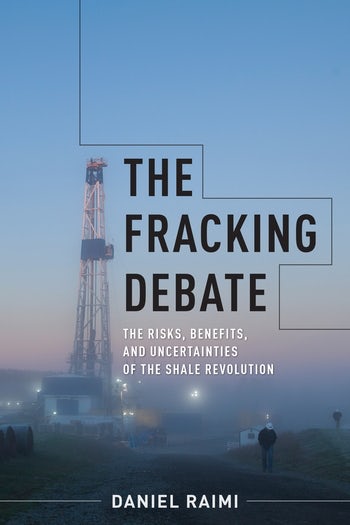 The Risks, Benefits, and Uncertainties of the Shale Revolution

Over roughly the past decade, oil and gas production in the United States has surged dramatically—thanks largely to technological advances such as high-volume hydraulic fracturing, more commonly known as “fracking.” This rapid increase has generated widespread debate, with proponents touting economic and energy-security benefits and opponents highlighting the environmental and social risks of increased oil and gas production. Despite the heated debate, neither side has a monopoly on the facts. In this book, Daniel Raimi gives a balanced and accessible view of oil and gas development, clearly and thoroughly explaining the key issues surrounding the shale revolution.

The Fracking Debate directly addresses the most common questions and concerns associated with fracking: What is fracking? Does fracking pollute the water supply? Will fracking make the United States energy independent? Does fracking cause earthquakes? How is fracking regulated? Is fracking good for the economy? Coupling a deep understanding of the scholarly research with lessons from his travels to every major U.S. oil- and gas-producing region, Raimi highlights stories of the people and communities affected by the shale revolution, for better and for worse. The Fracking Debate provides the evidence and context that have so frequently been missing from the national discussion of the future of oil and gas production, offering readers the tools to make sense of this critical issue.

In this fair and unbiased book, filled with firsthand accounts and written in a gritty style appropriate for the topic at hand, Raimi explores the technology, the regulation, and the socioeconomic outcomes of shale energy development. Holistic in its range and robust in its depth, The Fracking Debate provides a nuanced but accessible understanding of the shale revolution. Thomas B. Murphy, director, Penn State Marcellus Center for Outreach and Research

The Fracking Debate cuts through the thicket of questions and viewpoints surrounding the shale revolution with balanced evidence and insight delivered through engaging stories. It’s a refreshing ride—refreshing because you get the clear sense you are learning with the author as he seeks the truth about the shale boom. Richard Newell, president and CEO, Resources for the Future

Raimi’s book offers the most balanced, honest, and comprehensive account of fracking available, telling the story from all sides. Readers will appreciate the personal accounts from Raimi’s travels to far-flung oil fields coupled with in-depth yet accessible analysis of the science, regulations, and politics of the U.S. oil and gas boom. Hannah Wiseman, Florida State University College of Law

Depending on who’s saying it, ‘fracking’ signifies either a blessing or curse. In truth, it’s both. Raimi methodically explores the risks and rewards of a technical revolution that has made the United States the largest producer of oil and gas in the world once again. A thoughtful and accessible look at a highly contentious and generally misunderstood subject. Mark S. Brownstein, Environmental Defense Fund

The Fracking Debate is the most user-friendly resource on the key policy questions around hydraulic fracturing I have come across. Raimi tackles all of the hot-button topics surrounding fracking—including whether fracking contaminates water or contributes to climate change—concisely and in plain language easily accessible to lay persons. The Fracking Debate belongs on the bookshelf of every local elected official and state legislator who is grappling with hydraulic fracturing. Matthew Lepore, director, Colorado Oil and Gas Conservation Commission

A deft, fair analysis that clarifies the issues for both the general public and concerned policy makers. Kirkus Reviews (starred review)

At a time when everything from an otherwise unremarkable scientific report to a seemingly innocuous news item can be subject to intense scrutiny and mistrust, The Fracking Debate, a balanced guide to the contentious discussion on fracking, is a welcome resource. Science

[Raimi] brings a distinctively objective approach to the text, taking care to accurately represent all positions on the issue. . . . Will serve quite well in the classroom; for advanced courses in exploration geology or petroleum engineering, the text will be a valuable supplement to technical texts, providing excellent material for discussion. Choice

A well-rounded refresher and a fine primer for anybody new to the debate, or for those simply seeking more information. Natural Gas Intelligence Shale Daily

A worthy addition to the literature. Civil Engineering

If you can’t make oilfield visits a part of your next vacation, reading Raimi’s book, The Fracking Debate: The Risks, Benefits, and Uncertainties of the Shale Revolution, is the next best thing. Part of the Center on Global Energy Policy Series, The Fracking Debate can be regarded as the definitive book about fracking and the impact of the shale revolution—a revolution that has allowed U.S. natural gas production to reach all-time highs and reinvigorated domestic oil production. Jason Zasky, Failure Magazine