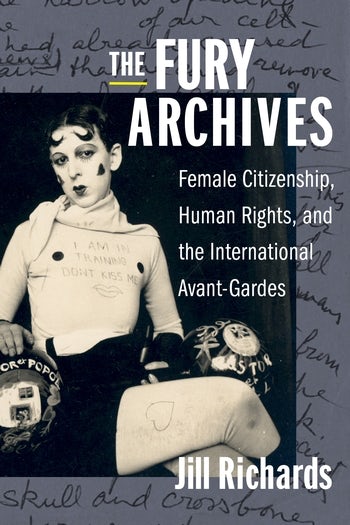 In the late nineteenth and early twentieth centuries, radical women’s movements and the avant-gardes were often in contact with one another, brought together through the socialist internationals. Jill Richards argues that these movements were not just socially linked but also deeply interconnected. Each offered the other an experimental language that could move beyond the nation-state’s rights of man and citizen, suggesting an alternative conceptual vocabulary for women’s rights.

Rather than focus on the demand for the vote, The Fury Archives turns to the daily practices and social worlds of feminist action. It offers an alternative history of women’s rights, practiced by female arsonists, suffragette rioters, industrial saboteurs, self-named terrorists, lesbian criminals, and queer resistance cells. Richards also examines the criminal proceedings that emerged in the wake of women’s actions, tracing the way that citizen and human emerged as linked categories for women on the fringes of an international campaign for suffrage.

Jill Richards’s book is masterful in its range of inquiries, beautifully written, and elegantly argued. The research supporting the book’s radical and provocative arguments is also exceptionally thorough and meticulously engaged, as it synthesizes and builds upon a number of comprehensive historical and theoretical debates. Elizabeth S. Anker, Cornell University

Jill Richards is assistant professor of English and affiliated faculty in the Women’s, Gender, and Sexuality Studies Program at Yale University. She is a coauthor of The Ferrante Letters: An Experiment in Collective Criticism (Columbia, 2020).