How a Countercultural Spirituality Revolutionized Religion from Antiquity to Today 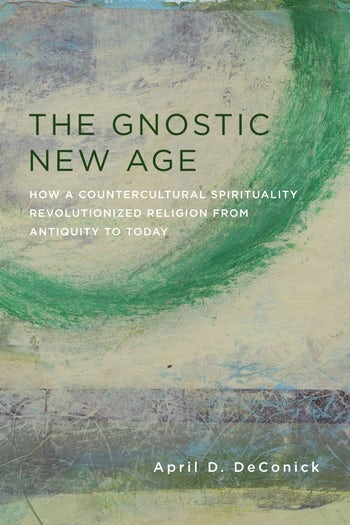 How a Countercultural Spirituality Revolutionized Religion from Antiquity to Today

Gnosticism is a countercultural spirituality that forever changed the practice of Christianity. Before it emerged in the second century, passage to the afterlife required obedience to God and king. Gnosticism proposed that human beings were manifestations of the divine, unsettling the hierarchical foundations of the ancient world. Subversive and revolutionary, Gnostics taught that prayer and mediation could bring human beings into an ecstatic spiritual union with a transcendent deity. This mystical strain affected not just Christianity but many other religions, and it characterizes our understanding of the purpose and meaning of religion today.

In The Gnostic New Age, April D. DeConick recovers this vibrant underground history to prove that Gnosticism was not suppressed or defeated by the Catholic Church long ago, nor was the movement a fabrication to justify the violent repression of alternative forms of Christianity. Gnosticism alleviated human suffering, soothing feelings of existential brokenness and alienation through the promise of renewal as God. DeConick begins in ancient Egypt and follows with the rise of Gnosticism in the Middle Ages, the advent of theosophy and other occult movements in the nineteenth and early twentieth centuries, and contemporary New Age spiritual philosophies. As these theories find expression in science-fiction and fantasy films, DeConick sees evidence of Gnosticism's next incarnation. Her work emphasizes the universal, countercultural appeal of a movement that embodies much more than a simple challenge to religious authority.

A paradigm shift in our understanding of religion, breaking new ground in scholarship on Gnosticism. Birger A. Pearson, author of Ancient Gnosticism: Traditions and Literature

Anyone interested in New Age spirituality in all its diversity and fullness will savor the pages of DeConick's latest masterpiece. Her portraits of ancient 'Gnostic' movements are provocative and compelling; finding connections between these ancient worldviews and our own through popular culture and movies is a stroke of absolute genius. Nicola Denzey Lewis, author of Introduction to Gnosticism: Hidden Voices, Ancient Worlds

DeConick has produced a fascinating, provocative, and readable interpretation of the Gnostic and Gnosticism. She emphasizes the transgressive nature of Gnostic spirituality, which confronted typical ancient spiritualities that made human beings subservient to the gods. Her book is a brave new salvo in the ongoing Gnostic Wars. Brent Landau, author of Revelation of the Magi: The Lost Tale of the Wise Men's Journey to Bethlehem

Scholarship on the histories of Gnosticism, esotericism, and mysticism has long glowed at the radioactive core of the comparative study of religion. April D. DeConick's work shines in this lineage. She demonstrates in rich detail how a new spiritual orientation that looks to a transcendent hidden God and engages in a radical criticism of ecclesial religion was first articulated in the ancient period and then resonated through the centuries to the present day, where it can best be seen in contemporary popular culture, film, and New Age thought, revelation, and experience. Enter the Gnostic New Age. Jeffrey J. Kripal, author of The Serpent's Gift: Gnostic Reflections on the Study of Religion

DeConick offers a valuable corrective to the recent reluctance of many scholars to use the term Gnosticism. For her, Gnosticism is not so much an identifiable religion as it is a form of late-antique spirituality, an attempt to consciously realize that the essential human self is nothing less than the supreme divinity's very own life essence lying dormant and unrecognized within the core human self, waiting to be awakened and reunite with its divine source. DeConick illustrates this spirituality as analogous to various modern New Age movements reflected in contemporary literature and cinema. John D. Turner, coauthor of Plato's Parmenides and Its Heritage, vol. 1: History and Interpretation from the Old Academy to Later Platonism and Gnosticism

DeConick has forcefully and elegantly thrown herself into the current scholarly debate on the Gnostics. In a book that is both rich in historical detail and passionate for deeper understanding, she argues not only that Gnostic spirituality provided a transformative and liberating experience for ancient devotees but also, even more, that it can challenge and subvert the views of religious questers of the present, illuminating the modern search for spiritual truth. Bart Ehrman, author of Jesus Before the Gospels: How the Earliest Christians Remembered, Changed, and Invented Their Stories of the Savior

A readable and engaging overview of ancient Gnostic beliefs and practices (in all their wild diversity) and a clear, meaningful guide for making sense of the often-chaotic source materials. . . . [The Gnostic New Age] is sure to become a reference point for scholarly debate. Choice

The indisputable merit of DeConick’s approach is that it allows us to grasp shifts that have been taking place in the articulations of gnosticism over long periods of time. Fryderyk Kwiatkowski, Gnosis: Journal of Gnostic Studies

In this engaging and provacative book, April D. DeConick enters the continuing discussion of how to define and interpret Gnosticism. David Brakke, Journal of Religion

The author has performed a great service by showing the historical and continuing role of transgressive spirituality based on personal experience and representing a massive Gnostic awakening in our time. Paradigm Explorer

April D. DeConick is Isla Carroll and Percy E. Turner Professor of Biblical Studies and chair of the Department of Religion at Rice University. She is the author of Holy Misogyny: Why the Sex and Gender Conflicts in the Early Church Still Matter (2013) and The Thirteenth Apostle: What the Gospel of Judas Really Says (2009). She contributed to the CNN special series Finding Jesus (2015).