The Great Rift Valleys of Pangea in Eastern North America 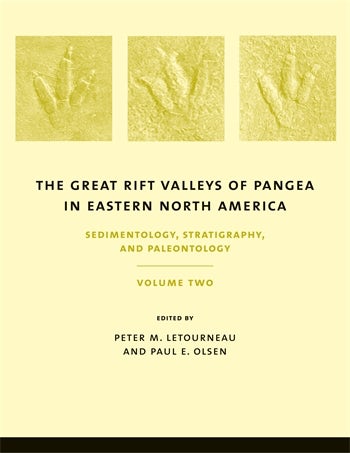 The Great Rift Valleys of Pangea in Eastern North America

Rift basins of Triassic-Jurassic age that are associated with the breakup of the Pangean supercontinent contain an extraordinary record of the physical and biological conditions during this important period of Earth history. Rather than studying the rift basins as local features, ongoing work reveals that the Triassic-Jurassic rifts should be considered in a broader context that spans the entire proto-Atlantic realm. The rift province, collectively called the central Atlantic margin system, spans more than 45 degrees of paleolatitude and records over 35 million years of Earth history. The central Atlantic margin basins are of broad appeal to researchers interested in topics as diverse as extensional tectonics, the global magnetostratigraphic timescale, the evolution of early mammals, the appearance and diversification of dinosaurs, rift to drift crustal dynamics, astronomical forcing of climate, and models for the formation and occurrence of economic minerals and fossil fuel deposits. This extensive two volume work offers in-depth coverage of the North American components of the Central Atlantic Magmatic Province rifts by experts in the field.

In volume 2, leading researchers give thorough reviews and highlight recent advances in our understanding of the sedimentary rocks, stratigraphic architecture, early dinosaur and reptile footprints, and vertebrae fossils of the Central Atlantic Magmatic Province.