The Highway of Despair 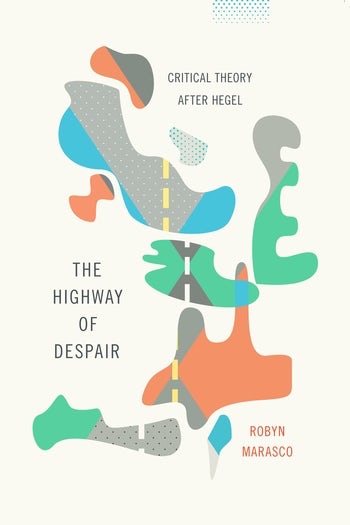 The Highway of Despair

Hegel's "highway of despair," introduced in his Phenomenology of Spirit, is the tortured path traveled by "natural consciousness" on its way to freedom. Despair, the passionate residue of Hegelian critique, also indicates fugitive opportunities for freedom and preserves the principle of hope against all hope. Analyzing the works of an eclectic cast of thinkers, Robyn Marasco considers the dynamism of despair as a critical passion, reckoning with the forms of historical life forged along Hegel's highway.

The Highway of Despair follows Theodor Adorno, Georges Bataille, and Frantz Fanon as they each read, resist, and reconfigure a strand of thought in Hegel's Phenomenology of Spirit. Confronting the twentieth-century collapse of a certain revolutionary dialectic, these thinkers struggle to revalue critical philosophy and recast Left Hegelianism within the contexts of genocidal racism, world war, and colonial domination. Each thinker also re-centers the role of passion in critique. Arguing against more recent trends in critical theory that promise an escape from despair, Marasco shows how passion frustrates the resolutions of reason and faith. Embracing the extremism of what Marx, in the spirit of Hegel, called the "ruthless critique of everything existing," she affirms the contemporary purchase of radical critical theory, resulting in a passionate approach to political thought.

The Highway of Despair is a superb and much needed book. Marasco argues that despair is not the dead end we think it to be (at least philosophically speaking) but is instead a state of being in which issues of control, authority and domination are resisted, in which normally suppressed passions and ideas can come to the fore and in which unworkable models of political order can be put to rest once and for all. James R. Martel, San Francisco State University

The Highway of Despair masterfully puts patient interpretation in the service of a powerful political and theoretical vision. By following the thread of negativity that joins Hegel to Adorno, Bataille, and Fanon, Marasco shows that 'despair' is not a feeling of impotence but a mode of comportment through which people register and engage the torn, divided character of their world. In drawing out and analyzing despair's surprising power to energize praxis and sustain thought, she simultaneously recasts critical theory's history and scrambles the tired oppositional coordinates through which we too often debate its future. Patchen Markell, University of Chicago

Is critical theory too theoretical, too negative, too destructive? What is to be done when there appears to be no way out of the horrors of contemporary life and rational hope for a better future recedes? Robyn Marasco's negative dialectical ambition is to reinvent and revivify critical theory by addressing prominent twentieth-century Left Hegelians (Adorno, Bataille, and Fanon) and recovering the protean notion of despair, treating it as a restless, energetic, and thus productive political passion rather than as a sign of reaction, resignation, pathology, or paralysis. Marasco's manifold experiments in new critical thinking are edgy, erudite, and demand a hearing. Steven Johnston, University of Utah

Can any honest appraisal of our current times avoid ending in despair? In this remarkable and deeply felt book, Robyn Marasco shows that squarely facing this troubling truth can be the first step in transcending it. Drawing on resources from the tradition of critical theory, as well as the legacy of Bataille and Fanon, she shows how hope can be derived from even the most melancholy of sciences. Martin Jay, University of California, Berkeley

Robyn Marasco provocatively argues that despair is not intrinsically paralyzing and antipolitical but is central to our capacity for critique and even for hope. The Highway of Despair de-centers Habermas within the tradition of critical theory by revealing traces of a counter-tradition within Left Hegelianism that rejects the impulse to systematize and rationalize and instead acknowledges the persistence of violence, injustice, and irrationality—finding resources in the passion of despair to critically engage with the world in all of its ugliness. Michaele Ferguson, University of Colorado, Boulder

Recommended. Upper-division undergraduates and above. Choice

Original... Anyone interested in the power of critique will profit from this book and will have to take seriously Marasco's provocative challenge to rethink the relation between despair and critique. Notre Dame Philosophical Reviews

An engaging read.... Marasco's work will undoubtedly reinvigorate the dialectical imagination and should be read by anyone with an interest in the future of critical theory. Theory and Event

This is a stunning book, one whose impact on critical theory will be felt for decades to come. Perspectives on Politics

Robyn Marasco is associate professor of political science at Hunter College. Her areas of specialization include critical theory, feminist theory, and the modern history of political thought. Her articles have appeared in Contemporary Political Theory, differences, Philosophy & Social Criticism, and Theory & Event.