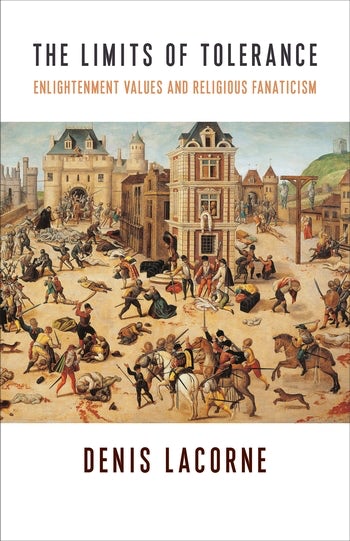 The modern notion of tolerance—the welcoming of diversity as a force for the common good—emerged in the Enlightenment in the wake of centuries of religious wars. First elaborated by philosophers such as John Locke and Voltaire, religious tolerance gradually gained ground in Europe and North America. But with the resurgence of fanaticism and terrorism, religious tolerance is increasingly being challenged by frightened publics.

In this book, Denis Lacorne traces the emergence of the modern notion of religious tolerance in order to rethink how we should respond to its contemporary tensions. In a wide-ranging argument that spans the Ottoman Empire, the Venetian republic, and recent controversies such as France’s burqa ban and the white-supremacist rally in Charlottesville, The Limits of Tolerance probes crucial questions: Should we impose limits on freedom of expression in the name of human dignity or decency? Should we accept religious symbols in the public square? Can we tolerate the intolerant? While acknowledging that tolerance can never be entirely without limits, Lacorne defends the Enlightenment concept against recent attempts to circumscribe it, arguing that without it a pluralistic society cannot survive. Awarded the Prix Montyon by the Académie Française, The Limits of Tolerance is a powerful reflection on twenty-first-century democracy’s most fundamental challenges.

He gives no pat answers, but an implicit lesson runs throughout. Defending toleration is not like protecting a jewel. It takes fixity of aim but also a feel for the changing context, persistence with a task that never ends and readiness to start again. Toleration does gradually spread. It can also suddenly vanish. The Economist

I simply don’t know a book on toleration that compares to this one. Denis Lacorne has managed to weave together both an intellectual history of ideas about toleration and a wide-ranging international survey of policies related to it. Theory and practice come together in a very illuminating way and will expand the American reader’s horizon beyond our borders. Mark Lilla, author of The Once and Future Liberal: After Identity Politics

Living in a religiously tolerant society, Americans no longer understand what the challenge of achieving religious toleration originally meant: learning to coexist with beliefs and practices that one detested. Denis Lacorne begins this critical survey by recalling the great Enlightenment voices for toleration: Locke, Voltaire, and the American founders. But he then examines modern European and American disputes to demonstrate why the struggle for toleration and free exercise remains so problematic—a fight that never quite ends but that we grasp much better after reading Lacorne's crisp and incisive chapters. Jack N. Rakove, author of Original Meanings: Politics and Ideas in the Making of the Constitution

A timely, erudite, and insightful book that sheds light on issues concerning whether and when contemporary democracies should restrict the practices and beliefs of nonmainstream religious and political groups. It is the best book written on this subject to date. Bruce Cain, author of Democracy More or Less: America’s Political Reform Quandary

Denis Lacorne is senior research fellow with the CERI (Centre d’Etudes et de Recherches Internationales) at Sciences Po, Paris. His books in English include Religion in America: A Political History (Columbia, 2011) as well as Language, Nation, and State: Identity Politics in a Multilingual Age (2004) and With Us or Against Us: Studies in Global Anti-Americanism (2005), both coedited with Tony Judt.