The Logic of Japanese Politics

Leaders, Institutions, and the Limits of Change 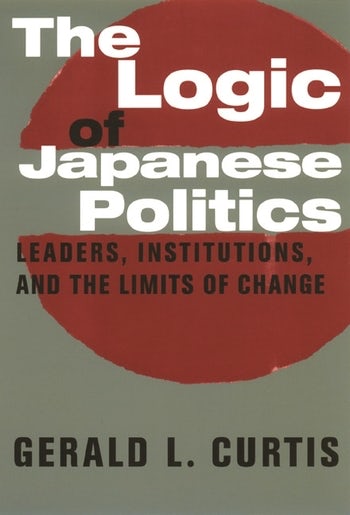 The Logic of Japanese Politics

Leaders, Institutions, and the Limits of Change

Curtis rejects the notion that cultural distinctiveness and consensus are the defining elements of Japan's political decision making, emphasizing instead the competition among and the profound influence of individuals operating within particular institutional contexts on the development of Japan's politics. The discussions featured here—as they survey both the detailed events and the broad structures shaping the mercurial Japanese political scene of the 1990s—draw on extensive conversations with virtually all of the decade's political leaders and focus on the interactions among specific politicians as they struggle for political power.

The Logic of Japanese Politics covers such important political developments as

 the Liberal Democratic Party's egress from power in 1993, after reigning for nearly four decades, and their crushing defeat in the "voters' revolt" of the 1998 upper-house election;

 the formation of the 1993 seven party coalition government led by prime minister Morihiro Hosokawa and its collapse eight months later;

 the historic electoral reform of 1994 which replaced the electoral system operative since the adoption of universal manhood suffrage in 1925; and

 the decline of machine politics and the rise of the mutohaso—the floating, nonparty voter.

Scrutinizing and interpreting a complex and changing political system, this multi-layered chronicle reveals the dynamics of democracy at work—Japanese-style. In the process, The Logic of Japanese Politics not only offers a fascinating picture of Japanese politics and politicians but also provides a framework for understanding Japan's attempts to surmount its present problems, and helps readers gain insight into Japan's future.

Logic is a fine book, in fact an outstanding one. The jacket blurbs are, for once, right in their enthusiasm...For the Japanese scholar, the detail-oriented reader and anyone who wants an insider's view, written by an outsider, this book has no current peer. John E. Tropman, Asia Pacific Business Review

[A] senior statesman in the field.... Curtis does not shun the complexity and uncertainty of post-1993 Japanese politics, but revels in it. He has produced a remarkable book that presents the political history of the 1990s in its full complexity. Steven K. Vogel, University of California, Berkeley, Journal of Democracy

No American has done a better job of explaining the seemingly inexplicable world of Japanese politics than Professor Gerry Curtis of Columbia. His latest book, his best, is extremely valuable, concise, thoughtful, and very well written. David Halberstam

Introduction1
1. The Politics of Complacency
2. The End of One-Party Dominance
3. The Rise and Fall of Coalition Government
4. The Politics of Electoral Reform
5. The LDP's Return to Power
6. Japan's Uncertain Political Future