The Making of a Periphery

How Island Southeast Asia Became a Mass Exporter of Labor 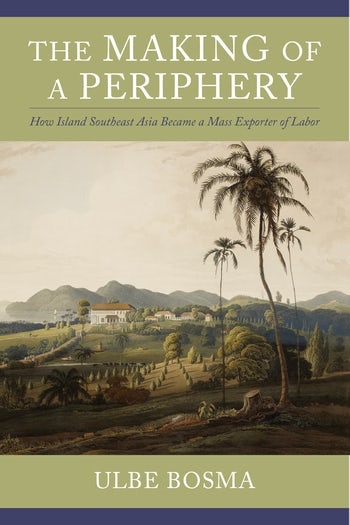 The Making of a Periphery

How Island Southeast Asia Became a Mass Exporter of Labor

Island Southeast Asia was once a thriving region, and its products found eager consumers from China to Europe. Today, the Philippines, Indonesia, and Malaysia are primarily exporters of their surplus of cheap labor, with more than ten million emigrants from the region working all over the world. How did a prosperous region become a peripheral one?

In The Making of a Periphery, Ulbe Bosma draws on new archival sources from the colonial period to the present to demonstrate how high demographic growth and a long history of bonded labor relegated Southeast Asia to the margins of the global economy. Bosma finds that the region’s contact with colonial trading powers during the early nineteenth century led to improved health care and longer life spans as the Spanish and Dutch colonial governments began to vaccinate their subjects against smallpox. The resulting abundance of workers ushered in extensive migration toward emerging labor-intensive plantation and mining belts. European powers exploited existing patron-client labor systems with the intermediation of indigenous elites and non-European agents to develop extractive industries and plantation agriculture. Bosma shows that these trends shaped the postcolonial era as these migration networks expanded far beyond the region. A wide-ranging comparative study of colonial commodity production and labor regimes, The Making of a Periphery is of major significance to international economic history, colonial and postcolonial history, and Southeast Asian history.

The incorporation of island Southeast Asia into the global capitalist economy was not one homogenizing process, as scholars from Immanuel Wallerstein to Daron Acemoglu would have it. Instead, local demographic, social, and political conditions determined the emergence of a variety of labor relations, migration patterns, and patterns of social inequality. In this pathbreaking book, Ulbe Bosma shows in great empirical detail how these diverse forms emerged centuries ago and continue to influence the connection between island Southeast Asia and the capitalist world economy to this day. Sven Beckert, Harvard University

Not institutions but bonded labor and demography are the roots of the reversal of fortune of Island Southeast Asia (the Philippines, Indonesia, Malaya); these areas are not just the periphery of the West but a crucial ring in the global commodity chain. By revisiting the major theories and analyses of dependency, Ulbe Bosma provides new insights on the long history of Southeast Asia and well beyond it, he provides an original, decentralized perspective on the rise and transformations of global capitalism. Alessandro Stanziani, École des hautes études en sciences sociales

Ulbe Bosma makes a subtle and convincing argument for a more nuanced approach to the “reversal of fortune” thesis. Primary exports can bring development, and deindustrialization has been exaggerated. Malaysia, where the colonial authorities remained relatively independent of estates and mines, was less affected than Luzon or Java, where colonial powers taxed and spent too little. Populist policies of independent states need to be taken into account. William Clarence-Smith, SOAS University of London

This is a timely, important, and substantial book that makes a complex argument to explain long-term transformations in the economic performance of island Southeast Asia. Andreas Eckert, Humboldt University of Berlin

Ulbe Bosma is senior researcher at the International Institute of Social History and professor of international comparative social history at the Free University of Amsterdam. His publications include Being “Dutch” in the Indies: A History of Creolisation and Empire, 1500–1920 (2008) and The Sugar Plantation in India and Indonesia: Industrial Production, 1770–2010 (2013).