The Measure of America 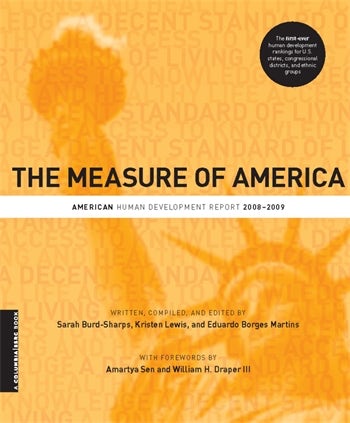 The Measure of America

The Measure of America is the first-ever human development report for a wealthy, developed nation. It introduces the American Human Development Index, which provides a single measure of well-being for all Americans, disaggregated by state and congressional district, as well as by gender, race, and ethnicity. The Index rankings of the 50 states and 436 congressional districts reveal huge disparities in the health, education, and living standards of different groups. Clear, precise, objective, and authoritative, this report will become the basis for all serious discussions concerning the realization of a fair, just, and globally competitive American society.

The Measure of America is a wonderful tool and informative guide for readers in search of a deeper understanding of the complex nature of American society. Metro Spirit

This very timely report articulates clearly the state of the country, using a multifaceted perspective; it is written in a straightforward, engaging manner... Essential. Choice

For the Secretaries of Labor, Education, Health, Housing, Transportation, and White House staffers on domestic policy, a highly useful gift would be: The Measure of America Derek Shearer, The Huffington Post

Kristen Lewis was a lead author of the water and sanitation report of the U.N. Millennium Project, led by Jeffrey Sachs, and writes extensively on development, gender, and the environment.

Eduardo Borges Martins was the chief statistician in the creation of the Human Development Index for Brazil's municipalities.

The American Human Development Project is an independent, non-profit initiative of Oxfam America, the Conrad N. Hilton Foundation, The Rockefeller Foundation, and the Social Science Research Council, with additional support from the Annenberg Foundation.