The Merchants of Zigong 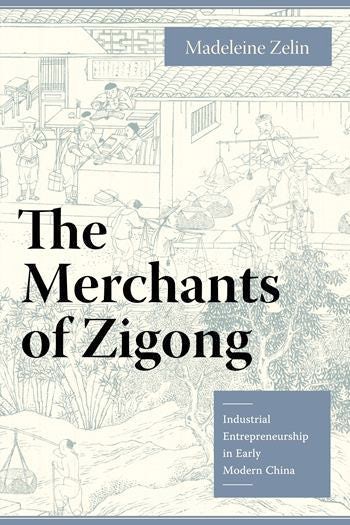 The Merchants of Zigong

At the periphery of the Chinese empire, a group of innovative entrepreneurs built companies that dominated the Chinese salt trade and created thousands of jobs in the Sichuan region. From its dramatic expansion in the early nineteenth century to its decline on the eve of the Sino-Japanese War in the late 1930s, salt production in Zigong was one of the largest and one of the only indigenous large-scale industries in China. Madeleine Zelin recounts the history of the salt industry to reveal a fascinating chapter in China's history and provide new insight into the forces and institutions that shaped Chinese economic and social development independent of Western or Japanese influence. Her book challenges long-held beliefs that social structure, state extraction, the absence of modern banking, and cultural bias against business precluded industrial development in China.

Zelin details the novel ways in which Zigong merchants mobilized capital through financial-industrial networks. She describes how entrepreneurs spurred growth by developing new technologies, capturing markets, and building integrated business organizations. Without the state establishing and enforcing rules, Zigong businessmen were free to regulate themselves, utilize contracts, and shape their industry. However, this freedom came at a price, and ultimately the merchants suffered from the underdevelopment of a transportation infrastructure, the political instability of early-twentieth-century China, and the absence of a legislative forum to develop and codify business practices.

Zelin's analysis of the political and economic contexts that allowed for the rise and fall of the salt industry also considers why its success did not contribute to "industrial takeoff" during that period in China. Based on extensive research, Zelin's work offers a comprehensive study of the growth of a major Chinese industry and resituates the history of Chinese business within the larger story of worldwide industrial development.

Focused on a group of late-nineteenth- and early-twentieth-century industrial entrepreneurs in an interior city removed from Western influences, Zelin's masterful study reshapes our understanding of Chinese economic culture. Her powerful account of lineage-based but diverse partnerships raising capital through self-enforcing contracts in the absence of a fully developed legal framework offers a fascinating historical parallel to some of the processes that have shaped China's more recent economic boom. Jonathan Ocko, North Carolina State University, author of Bureaucratic Reform in Provincial China

A stunning piece of historical scholarship. Professor Zelin's is the first work in Chinese economic history to combine exhaustive research in the local archives of numerous late Qing and Republican enterprises with a sophisticated analysis of all of the legal, technical, political, and sociological aspects of the evolution of the nation's salt-mining industry during the nineteenth and twentieth centuries. This book simply has to be read by anyone seriously interested in China's modern economic transformation. Frederic Wakeman, University of California, Berkeley, author of Strangers at the Gate: Social Disorder in South China, 1839-1861

This is a model work of business history that everyone in the field should read regardless of his or her country of specialization. It is both deeply researched and theoretically savvy. As a result, Zelin has much to teach us about entrepreneurship, technological innovation, and business practice in China, and she also forces us to reconsider some of our most hallowed beliefs about the importance for economic development of preexisting financial markets and a well-articulated body of commercial law. Naomi R. Lamoreaux, University of California, Los Angeles, editor of Learning by Doing in Firms, Markets, and Countries

A fine-grained study... [The Merchants of Zigong] is a trove of information about business and industry in late traditional China. David D. Buck, China Review

The Merchants of Zigong is a well-argued and well-documented book on the history of Chinese trade and industry. Juanjuan Peng, The Sixteenth Century Journal

Provides a revelatory analysis of a large-scale industry in the nineteenth and first half of the twentieth centuries...wonderfully rich detail that repays slow and careful reading. English Historical Review

Tables, Figures, Maps, and Illustrations
Chinese Weights, Measures, and Money
Preface
1. Salt Administration and Salt Technology
2. The Structure of Investment in Late Qing Furong
3. Fragmentation as a Business Strategy
4. Organization and Entrepreneurship in Qing Furong
5. The Growth of an Urban Workforce
6. Official Transport and Merchant Sales
7. Technological and Organizational Change, 1894–1930
8. The Changing of the Guard at the Furong Saltyard
9. Politics, Taxes, and Markets: The Fate of Zigong in the Early Twentieth Century
10. Zigong: Industrial City or Handicraft Enclave?
Epilogue
Notes
Glossary of Selected Chinese Names and Terms
Bibliography
Index