Inside the Global Battle for Media Freedom 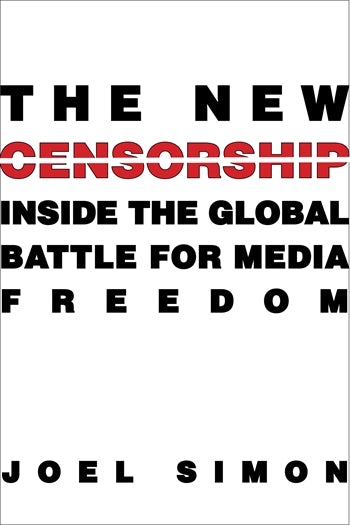 Inside the Global Battle for Media Freedom

Journalists are being imprisoned and killed in record numbers. Online surveillance is annihilating privacy, and the Internet can be brought under government control at any time. Joel Simon, the executive director of the Committee to Protect Journalists, warns that we can no longer assume that our global information ecosystem is stable, protected, and robust. Journalists are increasingly vulnerable to attack by authoritarian governments, militants, criminals, and terrorists, who all seek to use technology, political pressure, and violence to set the global information agenda.

Reporting from Pakistan, Russia, Turkey, Egypt, and Mexico, among other hotspots, Simon finds journalists under threat from all sides. The result is a growing crisis in information—a shortage of the news we need to make sense of our globalized world and fight human rights abuses, manage conflict, and promote accountability. Drawing on his experience defending journalists on the front lines, he calls on "global citizens," U.S. policy makers, international law advocates, and human rights groups to create a global freedom-of-expression agenda tied to trade, climate, and other major negotiations. He proposes ten key priorities, including combating the murder of journalists, ending censorship, and developing a global free-expression charter to challenge the criminal and corrupt forces that seek to manipulate the world's news.

From his vantage point as director of the Committee to Protect Journalists, Joel Simon has worked tirelessly to get kidnapped or imprisoned reporters freed. He's campaigned globally for justice in cases of murdered journalists. In The New Censorship, he warns us of new threats – like the insidious information management techniques of "democratators" Vladimir Putin and Recip Tayyip Erdogan. Simon's prescriptions for how to counter these new challenges are wise and insightful. He offers hope to all who care about maintaining the free flow of information in a world full of would-be censors. Ann Cooper, Columbia Journalism School

Joel Simon is a warrior for press freedom and the place of journalists in every culture and country. Here he writes with characteristic passion and insight on the importance of fighting press censorship around the world, reminding us that we have new tools but old demons remain. Tom Brokaw, NBC News

Fascinating and comprehensive, The New Censorship should become a bible for anyone seeking an honest, up-to-date grasp of the global state of press freedom. Well-written and lucidly argued, this is a must-read. Jon Lee Anderson, staff writer for The New Yorker, author of Che Guevara: A Revolutionary Life

Simon's assessment of what it means to be a journalist and his call to action at book's end are moving and practical. A must-read. Booklist (starred review)

Simon makes a persuasive case that the global trend is toward less, not greater, freedom of the press. New Yorker

A case for why the goal of upholding 'press freedom' needs to expand, in the digital age, to defending 'freedom of information.' David Greenberg, The American Prospect

Acknowledgments
Introduction: A Murder in Pakistan
1. Informing the Global Citizen
2. The Democratators
3. The Terror Dynamic
4. Hostage to the News
5. Web Wars
6. Under Surveillance
7. Murder Central
8. Journalists by Definition
9. News of the Future (and the Future of News)
Notes
Selected Bibliography
Index

Read an excerpt from the chapter, "News of the Future (and the Future of News)":

Joel Simon is the executive director of the Committee to Protect Journalists and has written widely on media issues. He is a regular contributor to Slate and the Columbia Journalism Review, and his articles and commentary have appeared in the New York Review of Books, the New York Times, World Policy Journal, and other publications. He is also the author of Endangered Mexico: An Environment on the Edge (1997) and We Want to Negotiate: The Secret World of Kidnapping, Hostages, and Ransom (2019).