Beyond the Boundary of Self 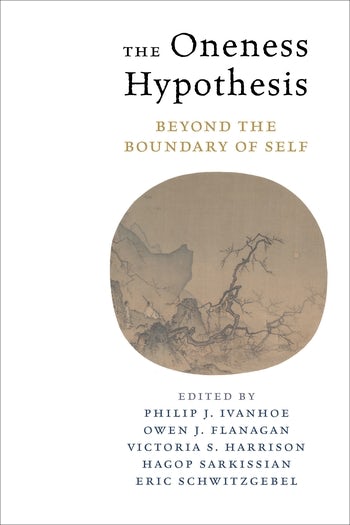 Beyond the Boundary of Self

The idea that the self is inextricably intertwined with the rest of the world—the “oneness hypothesis”—can be found in many of the world’s philosophical and religious traditions. Oneness provides ways to imagine and achieve a more expansive conception of the self as fundamentally connected with other people, creatures, and things. Such views present profound challenges to Western hyperindividualism and its excessive concern with self-interest and tendency toward self-centered behavior.

This anthology presents a wide-ranging, interdisciplinary exploration of the nature and implications of the oneness hypothesis. While fundamentally inspired by East and South Asian traditions, in which such a view is often critical to their philosophical approach, this collection also draws upon religious studies, psychology, and Western philosophy, as well as sociology, evolutionary theory, and cognitive neuroscience. Contributors trace the oneness hypothesis through the works of East Asian and Western schools, including Confucianism, Mohism, Daoism, Buddhism, and Platonism and such thinkers as Zhuangzi, Kant, James, and Dewey. They intervene in debates over ethics, cultural difference, identity, group solidarity, and the positive and negative implications of metaphors of organic unity. Challenging dominant views that presume that the proper scope of the mind stops at the boundaries of skin and skull, The Oneness Hypothesis shows that a more relational conception of the self is not only consistent with contemporary science but has the potential to lead to greater happiness and well-being for both individuals and the larger wholes of which they are parts.

A fascinating collection of very diverse pieces on a most important and too often neglected subject. Truly notable for the range of approaches exhibited, the different traditions or cultures treated, and the variety of questions, both theoretical and interpretative, that are examined. Lee H. Yearley, Walter Y. Evans-Wentz Professor of Oriental Philosophy, Religions, and Ethics, Stanford University

Individualism, the assumption that humans are ontologically distinct, fully autonomous, naturally self-interested beings is a foundational philosophical idea of modern Western culture. It is also, arguably, an increasingly disastrous one for the well-being both of the individuals it celebrates and the societies to which they belong. The impressive list of distinguished contributors to this important book show in many different ways that this assumption is highly debatable and culturally contingent. It should be read by anyone interested in the roots of the grave problems currently facing the world. John Dupré, director of Egenis, professor of philosophy of science, University of Exeter

Positing that many of the pressing problems of our age are rooted into restrictive views of the boundaries of the self, this fascinating collection of essays provides a wealth of insights about how oneness might—or might not—be relevant today. From history to religion, philosophy (East and West), and psychology, the issue is tackled from a striking variety of different angles. A stimulating and inspiring read. Sébastien Billioud, professor of anthropology, history, intellectual history, and religions of contemporary China, University Paris Diderot

The Oneness Hypothesis proposes a fascinating and timely exploration of the idea of oneness from different disciplinary angles, while synthesizing current knowledge and outlining a path forward. The editors of the volume are leading scholars who will have a substantial impact on future conversations and scholarship about this topic. Ara Norenzayan, professor of psychology and director of the Centre for Human Evolution, Cognition, and Culture, University of British Columbia

This innovative collection explores this theme from a variety of different angles. A. Kind, Claremont McKenna College, Choice

Owen J. Flanagan is James B. Duke Professor of Philosophy and codirector of the Center for Comparative Philosophy at Duke University, where he also holds appointments in psychology and neuroscience.

Victoria S. Harrison is professor of philosophy at the University of Macau.

Hagop Sarkissian is associate professor in the Department of Philosophy at the City University of New York, Baruch College, and the CUNY Graduate Center.

Eric Schwitzgebel is professor of philosophy at the University of California, Riverside.