The Origins of Neoliberalism

Modeling the Economy from Jesus to Foucault 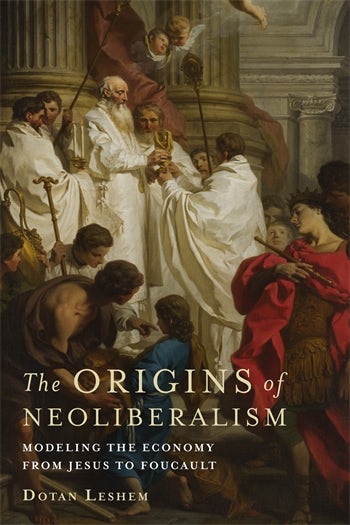 The Origins of Neoliberalism

Modeling the Economy from Jesus to Foucault

Dotan Leshem recasts the history of the West from an economic perspective, bringing politics, philosophy, and the economy closer together and revealing the significant role of Christian theology in shaping economic and political thought. He begins with early Christian treatment of economic knowledge and the effect of this interaction on ancient politics and philosophy. He then follows the secularization of the economy in liberal and neoliberal theory.

Leshem draws on Hannah Arendt's history of politics and Michel Foucault's genealogy of economy and philosophy. He consults exegetical and apologetic tracts, homilies and eulogies, manuals and correspondence, and Church canons and creeds to trace the influence of the economy on Christian orthodoxy. Only by relocating the origins of modernity in Late Antiquity, Leshem argues, can we confront the full effect of the neoliberal marketized economy on contemporary societies. Then, he proposes, a new political philosophy that re-secularizes the economy will take shape and transform the human condition.

Dotan Leshem's important book makes a very powerful and original contribution to an increasingly significant discussion across different disciplines. Its consistency, erudition, and relevance for contemporary research into the 'theological' genealogy of economy and government is impressive indeed. Étienne Balibar, author of Violence and Civility: On the Limits of Political Philosophy

In my opinion, this work is the most significant text so far in the field of what has come to be termed 'political theology.' Through his wide-ranging and careful scholarship, Leshem shows the extent to which a theological, biblically based dimension totally altered the operative categories of political virtue. John Milbank, author of Beyond Secular Order: The Representation of Being and the Representation of the People

This dazzling book takes us on an intellectual journey of rare substance. It demonstrates that our current predicament—the dominance of economic 'rationality,' the imperatives of growth—is at once newer and older, narrower and broader, than we have been taught. This is a humbling and teaching book that will change, that must change, the way we conceive of the economic in its relation to the political, the philosophical, and the theological. An economist and a philosopher, Leshem writes with masterful intensity and compellingly calls for an extraordinary transformation, for an 'ethical economy,' for nothing less than a new political philosophy. Gil Anidjar, author of Blood: A Critique of Christianity

The Origins of Neoliberalism demonstrates that histories of economic thought can no longer ignore pre-modernity and that political economy owes more to theological rationality than its modern exponents are willing to avow. Marx & Philosophy Review of Books

This exceptionally learned book will deservedly cause a stir among students of political and economic theology. John Plender, Times Literary Supplement

Dotan Leshem’s study is a valuable intervention in the larger project of developing a theological genealogy of the modern concepts of economy and government . . . The singular achievement of Leshem’s study is the way it extends our understanding of how the principles of incarnation and growth are central to the way the early church develops its unique notion of oikonomia . . . The great virtue of Leshem’s study is that it reconciles divergent approaches to the theological genealogy of economy and governmentality, and at the same time clarifies how Christianity inaugurates a distinct form of economic life at both micro (subjective) and macro (social) levels. Jennifer Rust, Syndicate

There is very much in Dotan Leshem’s book to recommend it . . . It is indeed an important study that will form the foundation of many more . . . Leshem’s book will no doubt continue to help direct me to new and richer fields for a long time to come. Mitchell Dean, Syndicate

Leshem entered largely unchartered waters and demonstrated how Christian thinking of oikonomia is not irrelevant to contemporary philosophical discussions of the trinity of politics, economy, and philosophy, as evinced especially in the work of Foucault, Agamben, and Arendt . . . On these and other related questions, Leshem has offered an important and groundbreaking book. Aristotle Papanikolaou, Syndicate

Leshem’s text, a brilliant, muscular historical semiotics of the economy, traces not only the category, but the model, of the economy . . . For those of us in the social sciences long conditioned to understand the capitalist economy as a profane and carnal domain, as the secret sociological ground of the power of dominant classes and nation-states, let alone our god, Leshem has turned the tables. Roger Friedland, Syndicate

From this point forward, anyone investigating the place of economy in Christian theology will have to engage with Leshem’s work. Adam Kotsko, An und für sich

Leshem has written a detailed account of the thought of late antiquity that will be of interest for anyone who has followed recent debates in politics, economics and theology through Foucault and Agamben as well as those interested in the conceptual origins of neoliberalism. David Hancock, Political Studies Review

Dotan Leshem's The Origins of Neoliberalism is a highly erudite study that proposes a new way of thinking modernity, notably the political-liberal space, through the economical conception which prevailed in the Christianity of late antiquity. Dana Shem-Ur, Tel-Aviv University, Politics, Religion & Ideology

Leshem’s recent volume, The Origins of Neoliberalism suffers from the implications of its subtitle: “Modeling the Economy from Jesus to Foucault.” One quickly gets the idea that this volume might be a historical genealogy of oikomenos from Jesus to Foucault. Yet, it is neither this, nor does it involve a thorough discussion of neoliberalism. Rather, it is a re-investigation into the Foucauldian neoliberal subject, who (which) internalizes the pastoral economy. It cannot escape comparisons with Agamben’s The Kingdom and the Glory, not only because of its focus on a particular genealogy, but also for its lack of consideration for globalization and white supremacy. The Journal for Cultural and Religious Theory

Will stand as an important contribution to the history of economics...there is much thought-provoking material here, and any reader will learn a lot of things from Leshem's ambitious book. Journal of the History of Economic Thought

Alongside political theologians, it will be of keen interest to Patristic scholars and to those engaged in ethical reflection around capitalism and the role of markets. Political Theology

Acknowledgments
List of Abbreviations
Introduction: Economy Before Christ
1. From Oikos to Ecclesia
2. Modeling the Economy
3. Economy and Philosophy
4. Economy and Politics
5. Economy and the Legal Framework
6. From Ecclesiastical to Market Economy
Notes
Works Cited
Index

View figures and read excerpts from the book:

Dotan Leshem is senior lecturer in the department of government and political theory at the School of Political Sciences, University of Haifa.