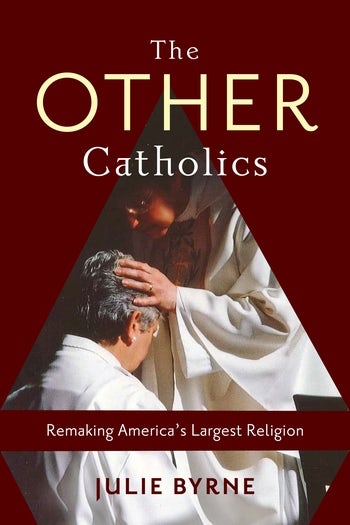 Independent Catholics are not formally connected to the pope in Rome. They practice apostolic succession, seven sacraments, and devotion to the saints. But without a pope, they can change quickly and experiment freely, with some affirming communion for the divorced, women's ordination, clerical marriage, and same-sex marriage. From their early modern origins in the Netherlands to their contemporary proliferation in the United States, these "other Catholics" represent an unusually liberal, mobile, and creative version of America's largest religion.

In The Other Catholics, Julie Byrne shares the remarkable history and current activity of independent Catholics, who number at least two hundred communities and a million members across the United States. She focuses in particular on the Church of Antioch, one of the first Catholic groups to ordain women in modern times. Through archival documents and interviews, Byrne tells the story of the unforgettable leaders and surprising influence of these understudied churches, which, when included in Catholic history, change the narrative arc and total shape of modern Catholicism. As Pope Francis fights to soften Roman doctrines with a pastoral touch and his fellow Roman bishops push back with equal passion, independent Catholics continue to leap ahead of Roman reform, keeping key Catholic traditions but adding a progressive difference.

Julie Byrne's well researched book, The Other Catholics, shows that there are major communities of Christians who understand themselves as Catholics but not Roman Catholics. These Christians are creating vibrant communities of believers and are elevating women to leadership, including ordination as priests and bishops. This broader reality of world Catholicism can now be better understood, thanks to Byrne's excellent work. Rosemary Ruether, author of Catholic Does Not Equal the Vatican: A Vision for Progressive Catholicism

This beautifully written study illuminates the range of groups that exist across the whole Catholic spectrum. Linked, despite their diversity, by a shared identification as Catholic and common emphasis on succession, sacrament, and saints, Byrne surfaces the complex, often unnoticed interactions between independent Catholics, Roman Catholics, and numerous religious traditions. This fresh approach opens a provocative window through which to view the meaning and making of Catholicity. Ann Taves, coeditor of What Matters? Ethnographies of Value in a Not So Secular Age

Byrne's intrepid research and vivid prose brings to light a subterranean realm of 'Other Catholics,' an utterly fascinating world of colorful characters and inventive approaches to authority. Just as Protestantism cannot be reduced to, say, Presbyterians, this book makes it increasingly difficult to equate 'Catholicism' merely with the Roman Catholic church. Randall Balmer, coeditor of Mormonism and American Politics

The growing phenomenon of Independent Catholicism is notoriously difficult to capture. Its varied forms defy easy categorization, and it generally makes its home in the ever-shifting margins of church and culture. Julie Byrne's years of research and extensive fieldwork have yielded this immensely valuable guide to the "Other Catholics." This book will doubtless open a window onto the "independent movement" for both scholars and interested people of faith. Byrne's choice to focus on two significant communities results in an engaging and sympathetic narrative, but never fails to be clear-eyed and critically informed. Any reader interested in the American religious landscape will be captivated. John Plummer, author of The Many Paths of the Independent Sacramental Movement: A National Study of Its Liturgy, Doctrine, and Leadership

I could not put The Other Catholics down. It is an excellent book, one that will make important contributions to the fields of Catholic studies, American studies, and American religious history. Moreover, the focus on gender and the dynamics of power and privilege will be of special interest to scholars of gender, women's studies, and sexuality. Byrne's historical, sociological, and anthropological research is at once original and rock solid, and her findings are compelling. Most important, her clear and approachable writing style will make this book appealing to a wide swath of readers. Kristy Nabhan-Warren, author of The Cursillo Movement in America: Catholics, Protestants, and Fourth-Day Spirituality

The growing field of ethnographic history will never be the same after The Other Catholics is published. Without question, this work will be considered a significant contribution to the fields of American Catholic studies and American religious history. There hasn't been a finer study of alternative forms of Catholic identity since James Fisher's The Catholic Counterculture in America. The Other Catholics is unique for its careful consideration of the role of women and LGBTQ people in the life of American Catholicism. Byrne's lucid and accessible writing style only adds to the book's value and usability in undergraduate courses. Michael Pasquier, editor of Gods of the Mississippi

Byrne's book is an excellent study of churches on the fringe that incubate new ideas and shed new light on mainstream religion. Through her storytelling, Byrne documents the multiple claims to be Catholic and recognizes that in the very writing of her book she, too, is producing Catholicism. Jane Shaw, Times Higher Education

Byrne's fresh approach opens a window through which to explore the meaning and making of Catholicism. Any reader interested in the American faith landscape will be captivated. Washington Review of Books

Drawing on deep research in archives as well as surveys, interviews, and ten years of field research and participant observations, the book is as important for the self-reflexive methods it reveals as for the remarkable story it tells. Grant Wacker, The Christian Century

[Julie Byrne] brings an astonishing narrative drive to a wide range of little-known historical and contemporary ethnographic material. There's nothing like a good story. Equal Writes

The Other Catholics is a heartfelt, readable, welcome addition to the history of religions. Reading Religion

The book makes intriguing reading, and Byrne skillfully combines a quite colloquial style with impeccable scholarship. For the specialist, the book is indispensable, but it could be appreciated by a more general readership,too. Nova Religio

An engaging, highly readable, and comprehensive study of the evolution of independent Catholic communities, and of the challenges and opportunities they have encountered in their efforts to reimagine Catholicism and build alternative models of church. Kathleen Kautzer, The Journal of Religion

A remarkable book, written with extraordinary clarity and eloquence and which exhibits a heartfelt sympathy with the individuals who populate it. It is both a wonderful introduction to the phenomenon of ‘independent’ Catholicism and an intriguing analysis of how one particular church of this kind has operated. Reviews in Religion & Theology

Byrne's field-shaping work will be an indispensable touchstone for future scholarship. Journal of Religious History

This carefully researched anthropological and ethnographic history will appeal to a wide readership, including anyone generally interested in religion, particularly Catholics, religious historians, and scholars in religious studies, and anyone interested in the dynamics of group struggle, the power plays in which “Big bodies block or expel” while the “other” shelters, shapes, and showcases the blocked and expelled. Jeanie C. Crain Missouri Western State University, Journal of American Culture

Julie Byrne is professor of religion and the Monsignor Thomas J. Hartman Chair in Catholic Studies at Hofstra University. She is the author of O God of Players: The Story of the Immaculata Mighty Macs (Columbia, 2003).