How the Voter Makes Up His Mind in a Presidential Campaign, Legacy Edition 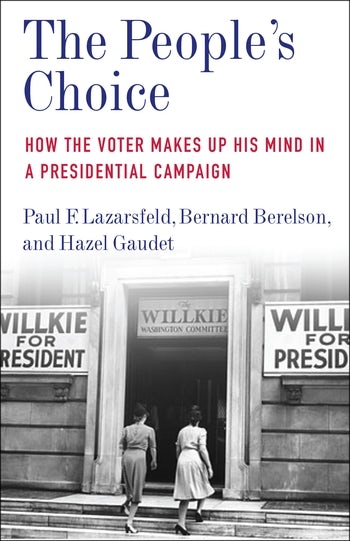 How the Voter Makes Up His Mind in a Presidential Campaign, Legacy Edition

The People’s Choice is a landmark psychological and statistical study of American voters during the 1940 and 1944 presidential elections, originally published in 1948. Amid a burgeoning interest in statistics and population sampling, it constituted the first systematic effort to trace voters’ behavior across the duration of a presidential campaign and to follow up on this data years later.

During the 1940 campaign, Paul F. Lazarsfeld, Bernard Berelson, and Hazel Gaudet followed a sample population of six hundred people from Erie County, Ohio, interviewing them monthly in the seven months leading up to Election Day. Their subsequent study in 1944 expanded the sample to include a nationwide cross-section of two thousand voters. Contrary to the fears of the time, Lazarsfeld, Berelson, and Gaudet found that media such as newspapers and radio and campaign advertising did not have a profound influence on individual voting habits. Instead, interpersonal interactions and word of mouth were more significant for most voters. They argued that mass media reached a small but crucial subset of people, who passed information on to less avid media consumers.

The study paired the same interviewers and interviewees over time, leading to remarkable extended conversations featuring more casual and exploratory discussions than were typical of social-scientific research. Quoted verbatim, they offer additional insight into the American electorate. A groundbreaking work of empirical political science, The People’s Choice remains of great importance in an era of anxiety about the influence of media on voting behavior.

Paul F. Lazarsfeld (1901–1976) was professor of sociology and founder and director of the Bureau of Applied Social Research at Columbia University. He was one of the pioneering figures in the development of empirical sociology and social research.

Bernard Berelson (1912–1979) was head of the Center for Advanced Studies in the Behavioral Sciences at Stanford University, director of applied social research and professor of sociology at Columbia University, and president of the Population Council. With Lazarsfeld, he was a coauthor of Voting: A Study of Opinion Formation in a Presidential Campaign (1954).

Hazel Gaudet (1908–1975) was a social scientist who worked on the Radio Research Project at Princeton, where she coauthored The Invasion from Mars (1940) with Lazarsfeld, before joining the Bureau of Applied Social Research. The American Political Science Association gives the Hazel Gaudet Erskine Political Psychology Career Achievement Award to honor remarkable people in the field of political psychology.