How China Is Building a Global Currency 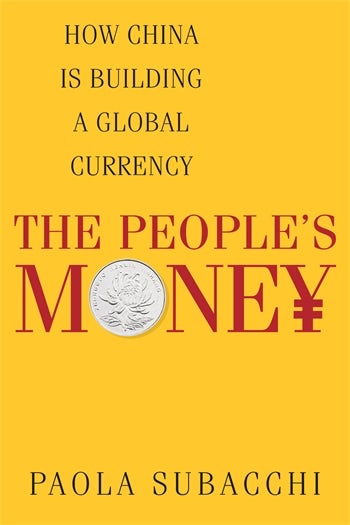 How China Is Building a Global Currency

Many of the world's major economies boast dominant international currencies. Not so for China. Its renminbi has lagged far behind the pound, the euro, and the dollar in global circulation—and for good reason. China has long privileged economic policies that have fueled development at the expense of the renminbi's growth, and it has become clear that the underpowered currency is threatening China's future. The nation's leaders now face the daunting task of strengthening the currency without losing control of the nation's economy or risking total collapse. How are they approaching this challenge?

In The People's Money, Paola Subacchi introduces readers to China's monetary system, mapping its evolution over the past century and, particularly, its transformation since Deng Xiaoping took power in 1978. Subacchi revisits the policies that fostered the country's economic rise while at the same time purposefully creating a currency of little use beyond China's borders. She shows the key to understanding China's economic predicament lies in past and future strategies for the renminbi. The financial turbulence following the global crisis of 2008, coupled with China's ambitions as a global creditor and chief economic power, has forced the nation to reckon with the limited international circulation of the renminbi. Increasing the currency's reach will play a major role in securing China's future.

Paola Subacchi brings a wealth of knowledge of China's economy and politics to this fascinating and informative exploration of China's currency, considering how the economic giant will develop its 'renminbi strategy' and take its proper place on the world's financial stage at a time of instability, economic slowdown, and domestic social tension. Diane Coyle, The Enlightened Economist, and author of GDP: A Brief but Affectionate History

Paola Subacchi clearly had access to a remarkable depth and breadth of people in writing this book, and the insights she has drawn from those conversations and from her experience with this key topic make this well worth reading for anyone interested in understanding the history of the renminbi—and its possible future. Jim O'Neill, UK Commercial Secretary to the Treasury

China's attempt to create an international role for its currency, the renminbi, speaks to its geopolitical ambitions, financial reform efforts, and economic growth prospects alike. In this important book, Paola Subacchi uses renminbi internationalization as a window onto these larger questions about China's economic, financial, and political future. Her analysis is engaging and accessible; it will appeal to specialists and nonspecialists alike. Barry Eichengreen, author of Hall of Mirrors: The Great Depression, the Great Recession, and the Uses–and Misuses–of History

The People's Money may be the most detailed and comprehensive English-language account so far of China's efforts to pursue the internationalization of the renminbi. In this balanced and deeply-informed narrative, Paola Subacchi details the progress made—and the problems encountered—as the Chinese leadership strives to increase the global appeal of the renminbi. Yu Yongding, former president of the China Society of World Economics

A clear overview of the history and the issues, both in general and those facing Chinese policy-makers in particular. Peter Gordon, Asian Review of Books

Insightful.... The People's Money offers a rich, accessible and much needed account of the workings of China's opaque banking and financial systems.... It is filled with interesting evidence. Times Higher Education

The book is extremely readable and provides an informative overview about the topic, including contemporary historical background. Economic and Political Weekly

Preface
Introduction
1. Money Is the Game Changer
2. China's Extraordinary but Still Unfinished Transformation
3. A Financially Repressed Economy
4. China: A Trading Nation Without an International Currency
5. Living with a Dwarf Currency
6. Creating an International Currency
7. Building a Market for the Renminbi
8. The Renminbi Moves Around
9. Managing Is the Word
10. The Age of Chinese Money
Notes
Index

Paola Subacchi is a senior fellow at Chatham House, the Royal Institute of International Affairs, an independent policy institute based in London. She is a regular media commentator and writes for Project Syndicate and Foreign Policy.