A Discontinuous History of Political Freedom 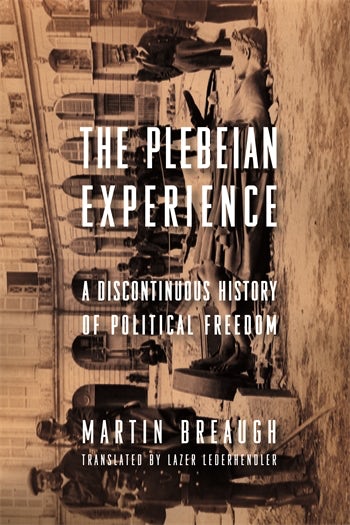 A Discontinuous History of Political Freedom

How do people excluded from political life achieve political agency? Through a series of historical events that have been mostly overlooked by political theorists, Martin Breaugh identifies fleeting yet decisive instances of emancipation in which people took it upon themselves to become political subjects. Emerging during the Roman plebs's first secession in 494 BCE, the plebeian experience consists of an underground or unexplored configuration of political strategies to obtain political freedom. The people reject domination through political praxis and concerted action, therefore establishing an alternative form of power.

Breaugh's study concludes in the nineteenth century and integrates ideas from sociology, philosophy, history, and political science. Organized around diverse case studies, his work undertakes exercises in political theory to show how concepts provide a different understanding of the meaning of historical events and our political present. The Plebeian Experience describes a recurring phenomenon that clarifies struggles for emancipation throughout history, expanding research into the political agency of the many and shedding light on the richness of radical democratic struggles from ancient Rome to Occupy Wall Street and beyond.

The Plebeian Experience is a rich, discontinuous history of plebeian uprisings from the founding of republican Rome to the present. Martin Breaugh writes vividly of these holidays of the oppressed in ancient Rome, Renaissance Italy, and modern Europe as seen through the eyes of Livy, Machiavelli, Montesquieu, Marx, Thompson, Soboul, and Abensour. Those who follow the Occupy or the Aboriginal Idle No More Movements will obtain fresh insight and exhilaration from Breaugh's highly readable account of these spontaneous struggles for dignity. Ed Andrew, University of Toronto

The plebeian insurrection is nothing other than the people's assuming of responsibility, through political action, for their own humanity. Stéphane Legrand, Le Monde

One of the most interesting features of the book is precisely the way that the author sets out to analyze the plebeian principle in what he calls 'a discontinuous history of political freedom,' in which, for Breaugh, as for Badiou or Rancière, politics is necessarily rare. Bruno Dias, Radical Philosophy

Breaugh describes the insurrection of the oppressed on the stage of the world and history. They are the voice of the excluded that we should never forget. He even reconstructs the philosophical genesis of a 'plebeian principle' that disrupts the presuppositions of inherited thought and traditional political philosophy. From this first book, which audaciously poses the all too often ignored question of the plebs, we can rightly judge that it is very promising. Miguel Abensour, University of Paris VII-Denis-Diderot

With such powerful, respected, and well-argued foundations, it is difficult to contest Breaugh's conclusions that true freedom for the plebs will only be born of conflict (not necessarily violent) with the established political order and that this conflict is driven by the memory of past plebeian experiences. Anna Brinkman, The Oxonian Review

From this perspective, Breaugh's study can be seen as a historical genealogy of global radical politics or, in his words, of "the politics of the many". Perspectives on Politics

Martin Breaugh's The Plebeian Experience, rendered in a crystal-clear translation by Lazer Lederhendler, is an impressively constructed and substantial contribution to political studies. Canadian Society for Continental Philosophy

Martin Breaugh was educated at the University of Paris VII-Denis-Diderot and is associate professor of political theory at York University (Toronto). His research focuses on the theory and practice of emancipatory politics and radical democracy.

Lazer Lederhendler is a full-time freelance literary translator. His translations of contemporary Québécois fiction have earned various distinctions in Canada and abroad. He lives in Montreal, Quebec.

Dick Howard is distinguished professor of philosophy at the State University of New York, Stony Brook. He is the author of The Primacy of the Political: A History of Political Thought from the Greeks to the French and American Revolutions and The Specter of Democracy: What Marx and Marxists Haven't Understood and Why.