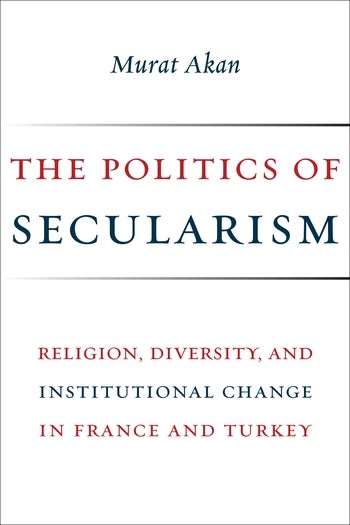 Discussions of modernity—or alternative and multiple modernities—often hinge on the question of secularism, especially how it travels outside its original European context. Too often, attempts to answer this question either imagine a universal model derived from the history of Western Europe, which neglects the experience of much of the world, or emphasize a local, non-European context that limits the potential for comparison. In The Politics of Secularism, Murat Akan reframes the question of secularism, exploring its presence both outside and inside Europe and offering a rich empirical account of how it moves across borders and through time.

Akan uses France and Turkey to analyze political actors' comparative discussions of secularism, struggles for power, and historical contextual constraints at potential moments of institutional change. France and Turkey are critical sites of secularism: France exemplifies European political modernity, and Turkey has long been the model of secularism in a Muslim-majority country. Akan analyzes prominent debates in both countries on topics such as the visibility of the headscarf and other religious symbols, religion courses in the public school curriculum, and state salaries for clerics and imams. Akan lays out the institutional struggles between three distinct political currents—anti-clericalism, liberalism, and what he terms state-civil religionism—detailing the nuances of how political movements articulate the boundary between the secular and the religious. Disputing the prevalent idea that diversity is a new challenge to secularism and focusing on comparison itself as part of the politics of secularism, this book makes a major contribution to understanding secular politics and its limits.

Murat Akan has given us an incredibly thorough account of how ideas about secularism have traveled between France and Turkey and how to relate these ideas to broader understandings of the relation between religion and society. His sophisticated theoretical approach is deeply informed by his empirical research. This book will clarify many misunderstandings in the comparative study of secularism and multiple modernities. It is a must-read for scholars from a wide range of social sciences as well as for an informed public. Peter van der Veer, author of The Value of Comparison

Comparative studies on France and Turkey often emphasize the opposition between rigid anticlerical secularism and moderate liberal secularism. This brilliant and incisive work by Murat Akan demonstrates that a binary approach ignores the central problem of political constructions of secularism: the civil religion of the state. With the meticulous erudition of a historian and theoretical mastery of a sociologist, Akan shows how liberal secularism won under the Third French Republic and how Kemalism in Turkey set the path for the hegemony of the AKP. Akan's is the best book I have read on the subject and will significantly refresh global conceptions of secularism. Jean Baubérot, École pratique des hautes études (Sorbonne)

Akan makes significant contributions to the study of religion and secularism, especially (but not only) in France and Turkey. The book also offers deep archival engagement; with his native knowledge of Turkish and fluency in French, Akan makes an original contribution to Turkey-France comparisons. The Politics of Secularism is comparative history at its best. Cihan Tuğal, University of California, Berkeley

An important contribution to historical, anthropological, political, and legal scholarship on secularism. Journal of Church and State

Akan makes a significant contribution to the study of secularism in France and Turkey. Those scholars interested in both politics of secularism in general, and French and Turkish experiences in particular will find the book useful. Politics and Religion

Murat Akan’s recent book is a significant contribution to this literature, particularly for his shift to consider the historical importance of state supported religious education and religious workers, most notably in the French and Turkish contexts. Russell Powell, Journal of Church and State

Murat Akan is associate professor in the Department of Political Science and International Relations at Boğaziçi University. He was a guest researcher at the Max Planck Institute for the Study of Religious and Ethnic Diversity, Germany in 2012–2013.