The Politics of the Governed

Reflections on Popular Politics in Most of the World 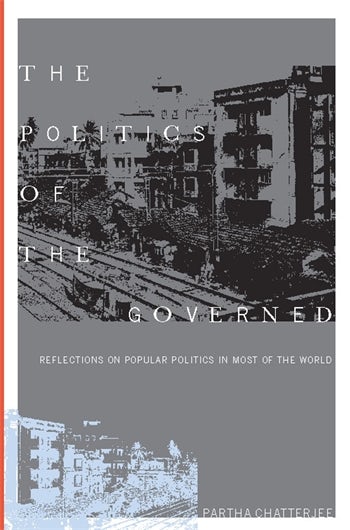 The Politics of the Governed

Reflections on Popular Politics in Most of the World

Often dismissed as the rumblings of "the street," popular politics is where political modernity is being formed today, according to Partha Chatterjee. The rise of mass politics all over the world in the twentieth century led to the development of new techniques of governing population groups. On the one hand, the idea of popular sovereignty has gained wide acceptance. On the other hand, the proliferation of security and welfare technologies has created modern governmental bodies that administer populations, but do not provide citizens with an arena for democratic deliberation. Under these conditions, democracy is no longer government of, by, and for the people. Rather, it has become a world of power whose startling dimensions and unwritten rules of engagement Chatterjee provocatively lays bare.

This book argues that the rise of ethnic or identity politics—particularly in the postcolonial world—is a consequence of new techniques of governmental administration. Using contemporary examples from India, the book examines the different forms taken by the politics of the governed. Many of these operate outside of the traditionally defined arena of civil society and the formal legal institutions of the state. This book considers the global conditions within which such local forms of popular politics have appeared and shows us how both community and global society have been transformed. Chatterjee's analysis explores the strategic as well as the ethical dimensions of the new democratic politics of rights, claims, and entitlements of population groups and permits a new understanding of the dynamics of world politics both before and after the events of September 11, 2001.

The Politics of the Governed consists of three essays, originally given as the Leonard Hastings Schoff Lectures at Columbia University in November 2001, and four additional essays that complement and extend the analyses presented there. By combining these essays between the covers of a single volume, Chatterjee has given us a major and urgent work that provides a full perspective on the possibilities and limits of democracy in the postcolonial world.

His book offers some hope in the attempts made by disenfranchised people to formulate an effective politics that refashions aspects of modernity and the state to their own needs. Siddartha Deb, The Nation

This project signals a real turn in subaltern studies tradition of South Asian scholarship insofar as it pushes us to investigate political resistance as emergent out of, rather than operating outside of, the state. The Politics of the Governed makes new conversations possible, and for this alone, it is well worth reading. Genevieve Lakier, South Asia News

A rich collection... The Politics of the Governed deserves a wide audience. Glyn Williams, Cultural Geographies

Preface
The Leonard Hastings Schoff Memorial Lectures 2001
The Nation in Heterogeneous Time
Populations and Political Society
The Politics of the Governed
Global/Local: Before and After September 11
The Great Peace
Battle Hymn
The Contradictions of Secularism
Are Indian Cities Becoming Bourgeois At Last?
Bibliography

Partha Chatterjee is director of the Centre for Studies in Social Sciences, Calcutta, and visiting professor of anthropology at Columbia University.