The Practice of Political Theory 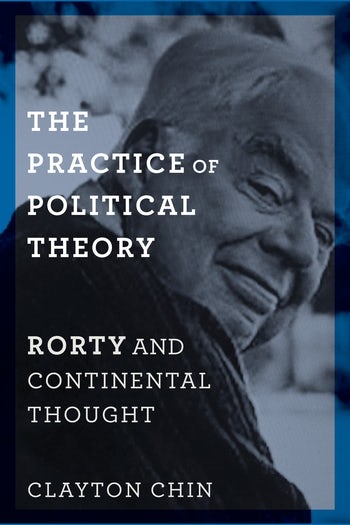 The Practice of Political Theory

Recent political thought has grappled with a crisis in philosophical foundations: how do we justify the explicit and implicit normative claims and assumptions that guide political decisions and social criticism? In The Practice of Political Theory, Clayton Chin presents a critical reconstruction of the work of Richard Rorty that intervenes in the current surge of methodological debates in political thought, arguing that Rorty provides us with unrecognized tools for resolving key foundational issues.

Chin illustrates the significance of Rorty’s thought for contemporary political thinking, casting his conception of “philosophy as cultural politics” as a resource for new models of sociopolitical criticism. He juxtaposes Rorty’s pragmatism with the ontological turn, illuminating them as alternative interventions in the current debate over the crisis of foundations in philosophy. Chin places Rorty in dialogue with continental philosophy and those working within its legacy. Focused on both important questions in pragmatist scholarship and central issues in contemporary political thought, The Practice of Political Theory is an important response to the vexed questions of justification and pluralism.

Richard Rorty, says Clayton Chin, was first deployed as a foil by critical theory, then rejected, and finally ignored. It is time now to reinvent Rorty, paying special attention to his later work in relation to other traditions. This is a thoughtful, timely, and closely articulated study. It commands close attention from those who will embrace it and those who may contest some of its claims. William E. Connolly, author of Aspirational Fascism: The Struggle for Multifaceted Democracy Under Trumpism

Richard Rorty stirred his theoretical milieu by combining postfoundational philosophy with a commitment to traditional liberalism. His provocation remains poignant in our current moment, when continental-inflected postfoundational thought finds itself tarrying again with materialism and ontology to save its political radicalism. Clayton Chin’s compelling and important book shows how Rorty’s thought offers an inclusive ethos for pluralistic democracies, and without pretending that unifying philosophical theory can do for us what only political activity can accomplish. Colin Koopman, author of Pragmatism as Transition: Historicity and Hope in James, Dewey, and Rorty

The Practice of Political Theory seeks to think critically about the political-philosophical contribution of Richard Rorty. Chin rightly attends to the limitations and untapped possibilities of Rorty’s work, understood as a contribution to 'cultural politics,' and therefore aims to undercut those criticisms of Rorty’s work that downplay his substantive contributions to political-philosophical thinking. In doing so, the book reads Rorty as helping us side-step debates around foundationalism and justification in political theorizing in favor of a situated mode of thinking that does not dispense with normative assessment. Melvin Rogers, author of The Undiscovered Dewey: Religion, Morality, and the Ethos of Democracy

The Practice of Political Theory is both an excellent reconstruction of Rorty’s pragmatist philosophy of sociopolitical criticism and an insightful and illuminating critical comparison of it with other leading approaches in contemporary political theory. It also makes an important contribution to debates over agonistics and pluralism. James Tully, author of Public Philosophy in a New Key

Clearly written and impressive for its scholarship.... Highly recommended. Choice

Clayton Chin is lecturer in political theory at the University of Melbourne.