The Practice of the Bible in the Middle Ages 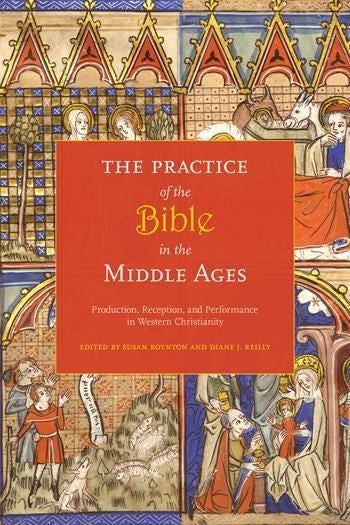 The Practice of the Bible in the Middle Ages

In this volume, specialists in literature, theology, liturgy, manuscript studies, and history introduce the medieval culture of the Bible in Western Christianity. Emphasizing the living quality of the text and the unique literary traditions that arose from it, they show the many ways in which the Bible was read, performed, recorded, and interpreted by various groups in medieval Europe. An initial orientation introduces the origins, components, and organization of medieval Bibles. Subsequent chapters address the use of the Bible in teaching and preaching, the production and purpose of Biblical manuscripts in religious life, early vernacular versions of the Bible, its influence on medieval historical accounts, the relationship between the Bible and monasticism, and instances of privileged and practical use, as well as the various forms the text took in different parts of Europe. The dedicated merging of disciplines, both within each chapter and overall in the book, enable readers to encounter the Bible in much the same way as it was once experienced: on multiple levels and registers, through different lenses and screens, and always personally and intimately.

The essays in this extraordinary volume will remind scholar and layperson how much the Bible Christians use today is the product of the Middle Ages. Not only did the uses of sacred scripture shape its very format and organization, but the liturgy, habits of monastic reading, preaching techniques, dramatization, and even politics molded its contents, the layout of its pages, and its translation as well. With scientific rigor and imagination, The Practice of the Bible in the Middle Ages demonstrates the ways in which even God's word had a human history. Herbert L. Kessler, Johns Hopkins University, author of Judaism and Christian Art

The Practice of the Bible in the Middle Ages is informed by a variety of textual, ritual, and art historical methods, in addition to more traditional exegetical questions. The central tenet of the work, and the fruit of that integration, is that the Bible was never simply or even primarily a text in the Middle Ages. Rather, it was a plastic and multiform body of texts that were meant to be thoroughly incorporated into one's prayer, worship, and daily life, and a variety of means were available to aid that process. Louis I. Hamilton, Drew University

The Practice of the Bible in the Middle Ages is one of those reference books that you must have in your Medieval library. Rebecca Graf, Bella Online

Its straightforward style makes it uniquely suitable for teaching. It would form an excellent textbook and should seriously be considered by anyone contemplating teaching an undergraduate course on the Bible in the Middle Ages. Medieval Review

...a valuable and accessible starting-point for the study of the medieval Bible and of its reception. Emily Corran, Journal of Ecclesiastical History

The book offers a useful survey for undergraduates, graduate students, and lecturers looking for a way into a dense but critically important topic. Owen M. Phelan, Religious Studies Review

The articles provide a clear and contextualised introduction to the topics they cover L. Donkin, English Historical Review

Susan Boynton is associate professor of historical musicology at Columbia University and author of Shaping a Monastic Identity: Liturgy and the History at the Imperial Abbey of Farfa, 1000-1125.

Diane J. Reilly is associate professor of art history at Indiana University, Bloomington, and author of The Art of Reform in Eleventh-Century Flanders: Gerard of Cambrai, Richard of Saint-Vanne, and the Saint Vaast Bible.