The Present as History 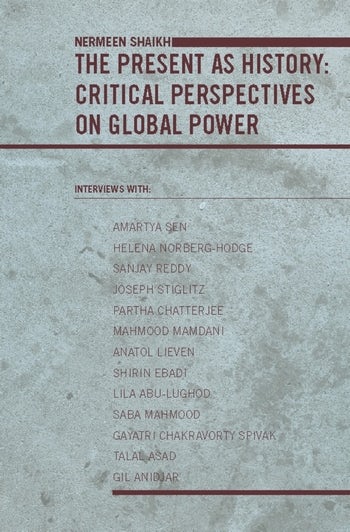 The Present as History

The Present as History is a rare opportunity to hear world-renowned scholars speak on the new imperialism, feminism and human rights, secularism and Islam, post-colonialism, and the global economy. They treat the United States as an object to be historically and politically interrogated rather than as the norm from which all else is to be evaluated and assess the Third World through its history of colonialism and neocolonialism rather than focusing on issues of culture and morality.

Amartya Sen discusses the shortcomings of the development agenda as it was conceived at the close of the Second World War, while Joseph Stiglitz explains economic globalization and the power of the International Monetary Fund in guiding its trajectory. Sanjay Reddy argues that global poverty estimates are flawed, and Helena Norberg-Hodge uses her experience in Tibet to lay bare the problems with development practice.

Political scientists Partha Chatterjee, Mahmood Mamdani, and Anatol Lieven chart the growth of hegemonic power from the colonial to the postcolonial period. Chatterjee examines the enduring effects of colonial administrative and governing practices, while Mamdani, focusing on the present global dispensation, explains the growth of terrorist movements around the world in the context of the Cold War. Lieven looks at the different strains of American nationalism and the continuities and ruptures between nineteenth-century empires and the present one. Iranian human rights lawyer Shirin Ebadi elaborates the relationship between Islam, democracy, and human rights while anthropologists Lila Abu-Lughod and Saba Mahmood respectively trace the historical use of women as an excuse for imperial intervention and discuss the relationship between liberalism, Islam, and secularism. Literary theorist and cultural critic Gayatri Chakravorty Spivak looks at the legacy of colonialism in the domain of language and education, and isolates the problems associated with human rights discourse and practice.

Nermeen Shaikh has worked at the Sustainable Development Policy Institute in Islamabad and the International Institute for Environment and Development in London. She works at the Asia Society in New York City.