The Rationale Divinorum Officiorum of William Durand of Mende

A New Translation of the Prologue and Book One 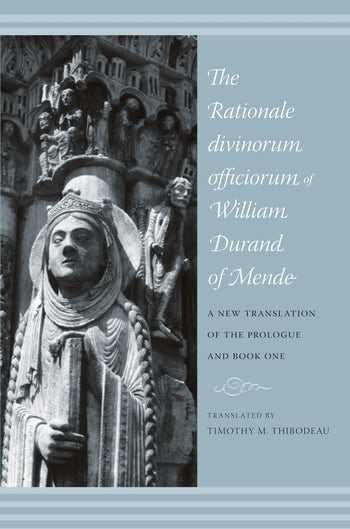 The Rationale Divinorum Officiorum of William Durand of Mende

A New Translation of the Prologue and Book One

The Rationale Divinorum Officiorum is arguably the most important medieval treatise on the symbolism of church architecture and rituals of worship. Written by the French bishop William Durand of Mende (1230-1296), the treatise is ranked with the Bible as one of the most frequently copied and disseminated texts in all of medieval Christianity. It served as an encyclopedic compendium and textbook for liturgists and remains an indispensable guide for understanding the significance of medieval ecclesiastical art and worship ceremonies.

This book marks the first English translation of the prologue and book one of the Rationale in almost two centuries. Timothy M. Thibodeau begins with a brief biography of William Durand and a discussion of the importance of the work during its time. Thibodeau compares previous translations of the Rationale in the medieval period and afterward. Then he presents his translation of the prologue and book one. The prologue discusses the principles of allegorical interpretation of the liturgy, while book one features detailed descriptions of the various parts of the church and its ecclesiastical ornaments. It also features extensive commentary on cemeteries, various rites of consecration and dedication, and a discussion of the sacraments.

Thibodeau is a well-respected historian who has published extensively on the history of Christianity and the liturgy of the medieval Church. He is also coeditor of the critical edition of the Rationale in Latin. His translation is an indispensable guide for both scholars and general readers who hope to gain a richer understanding of medieval art, architecture, and culture.

We are indebted to Thibodeau for making this accessible to students and scholars, and the more general reader, for a long time to come. Kenneth Stevenson, Journal of Theological Studies

[Thibodeau's] long and close engagement with the text is... unrivalled in undertaking an Enlgish translation of the prologue and first book. Journal of Ecclesiastical History

Preface
Abbreviations
Introduction
Prologue
Book 1. On the church building and ecclesiastical property and furnishings; On consecrations and the sacraments
1. On the church building and its parts
2. On the altar
3. On the pictures, curtains, and ornaments of the church
4. On the bells
5. On the cemetery and other sacred and religious places
6. On the dedication of a church
7. On the dedication of the altar
8. On consecrations and unctions
9. On the ecclesiastical sacraments
Notes
Bibliography
Index