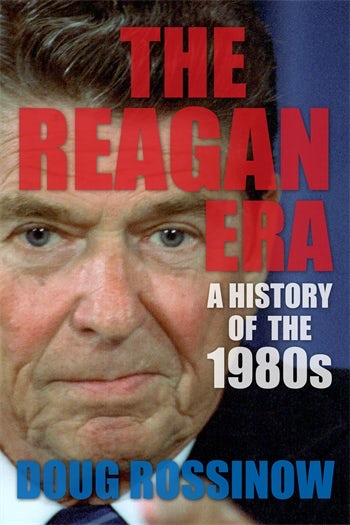 In this concise yet thorough history of America in the 1980s, Doug Rossinow takes the full measure of Ronald Reagan's presidency and the ideology of Reaganism. Believers in libertarian economics and a muscular foreign policy, Reaganite conservatives in the 1980s achieved impressive success in their efforts to transform American government, politics, and society, ushering in the political and social system Americans inhabit today.

Rossinow links current trends in economic inequality to the policies and social developments of the Reagan era. He reckons with the racial politics of Reaganism and its debt to the backlash generated by the civil rights movement, as well as Reaganism's entanglement with the politics of crime and the rise of mass incarceration. Rossinow narrates the conflicts that rocked U.S. foreign policy toward Central America, and he explains the role of the recession during the early 1980s in the decline of manufacturing and the growth of a service economy.

From the widening gender gap to the triumph of yuppies and rap music, from Reagan's tax cuts and military buildup to the celebrity of Michael Jackson and Madonna, from the era's Wall Street scandals to the successes of Bill Gates and Sam Walton, from the first "war on terror" to the end of the Cold War and the brink of America's first war with Iraq, this history, lively and readable yet sober and unsparing, gives readers vital perspective on a decade that dramatically altered the American landscape.

This is one of the best books on the 1980s written to date. Doug Rossinow offers a deeply researched and compelling account of the decade in its many facets: political, economic, cultural, and international. Jeremi Suri, University of Texas at Austin, author of Liberty's Surest Guardian: American Nation-Building from the Founders to Obama

The Reagan Era is an engaging, smart, wide-ranging, thorough, and well-written account of the presidency of Ronald Reagan and the world he helped to bring about. Eric Arnesen, George Washington University

With rare eloquence and erudition, Doug Rossinow captures the many contradictions of the 1980s, years when the cultural, political, and economic landscape of the United States was decisively reconfigured by the rise of Ronald Reagan and his conservative movement. This book not only paints a vivid portrait of a momentous historical turning point, it also illuminates dynamics that continue to shape our world even now. There is no better introduction to the Reagan years. Joseph A. McCartin, Georgetown University

A thoughtful analysis that will annoy and please readers on both sides of the aisle. Kirkus Reviews

This comprehensive work is an indispensable resource for anyone seeking to understand the politics of a pivotal decade. Washington Independent Review of Books

Exhaustively researched, yet candidly accessible to readers of all backgrounds, The Reagan Era: A History of the 1980's is a choice pick for public and college library American History shelves. The Midwest Book Review

A valuable teaching tool and helpful synthesis of a significant presidency and period. Gil Troy, The Historian

Comprehensive and engaging...Doug Rossinow weaves together culture, politics, economics, and foreign relations to produce a detailed, accessible account of the USA in the 1980s. Journal of Contemporary History

Acknowledgments
Introduction: Common Sense
1. The Time Is Now
2. The Agenda
3. Victory on Capitol Hill
4. An Aggressive Foreign Policy
5. The Purge
6. 1983: The World at the Brink
7. The High Eighties
8. Days of Fear
9. The Winner
10. Arms and the Man
11. The Crisis
12. Strength Through Peace
13. The Election of Willie Horton
14. The Free World
15. Top of the Heap
Notes
Index

Read "Common Sense," the introduction to The Reagan Era:

Doug Rossinow, professor of history at Metropolitan State University in St. Paul, Minnesota, is the author of numerous works, including Visions of Progress: The Left-Liberal Tradition in America. He has been a Fulbright Scholar at the University of Oslo and is past president of the Peace History Society.