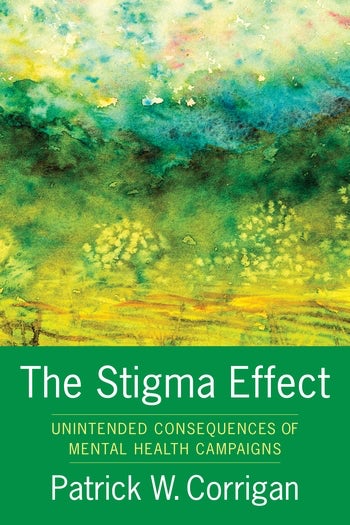 Despite efforts to redress the prejudice and discrimination faced by people with mental illness, a pervasive stigma remains. Many well-meant programs have attempted to counter stigma with affirming attitudes of recovery and self-determination. Yet the results of these efforts have been mixed. In The Stigma Effect, psychologist Patrick W. Corrigan examines the unintended consequences of mental health campaigns and proposes new policies in their place.

Corrigan analyzes the agendas of government agencies, mental health care providers, and social service agencies that work with people with mental illness, dissecting how their best intentions can misfire. For example, a campaign to change the language around mental illness by replacing supposedly stigmatizing words with empowering ones has made little difference in how people with mental health conditions are viewed. Educational programs that frame mental illness as a brain disorder have made the general public less likely to blame people for their illnesses, but also skeptical that such conditions can be cured. Ultimately, Corrigan argues that effective strategies require leadership by those with lived experience, as their recovery stories replace ideas of incompetence and dangerousness with ones of hope and empowerment. As an experienced clinical researcher, as an advocate, and as a person who has struggled with such prejudices, Corrigan challenges readers to carefully examine anti-stigma programs and reckon with their true effects.

How do we, as a society, reduce stigmatization of the seriously mentally ill? As Patrick Corrigan persuasively argues in this thorough inquiry into the subject, we should listen to their stories, for then we will discover fellow human beings, and not the “other” we fear. Robert Whitaker, author of Anatomy of an Epidemic: Magic Bullets, Psychiatric Drugs, and the Astonishing Rise of Mental Illness

This is a special book. Not only does Corrigan provide the best introduction to mental illness that I have seen, as well as providing concrete guidance on how to end the stigma associated with it, but by interweaving his own experiences, Corrigan offers the academic community a new and inspiring model for disseminating our work in a more engaging and effective way. The result is a book that raises the bar for the rest of us. Larry Davidson, Yale University School of Medicine

The strength of this book is the way it balances the interconnected components of self-stigma and public stigma, with equally strong treatment of both. It will be of interest to people interested or involved in stigma reduction, either as advocates, policy folks, or personally. Stephanie Knaak, University of Calgary

The book is useful for anyone teaching or practicing in the fields of counseling, social work, psychology, or medical education and public health. Recommended. Choice

Acknowledgments
Preface
1. Who Is the Person with Serious Mental Illness?
2. What Is the Stigma of Mental Illness?
3. Three Competing Agendas to Erase Stigma
4. It Is Much More Than Changing Words
5. Protest: Just Say No to Stigma
6. Beware the Educational Fix
7. Beating Stigma Person to Person
8. Lessons Learned for Future Advocacy
References
Index

Read the preface of THE CEO'S BOSS: TOUGH LOVE IN THE BOARD ROOM by William M. Klepper. THE CEO'S BOSS is the definitive guide to a productive working relationship between corporate boards and CEOs. In this revised edition, Klepper renews the paradigm set forth in the first edition, offering new case studies of companies such as Wells Fargo, BP, Hewlett-Packard, and Proctor & Gamble.

Patrick W. Corrigan is Distinguished Professor of Psychology at the Illinois Institute of Technology. He is principal investigator of the National Consortium for Stigma and Empowerment. His books include The Stigma of Disease and Disability (2014).