The Universe as It Really Is

Thomas R. Scott, with the assistance of James Lawrence Powell 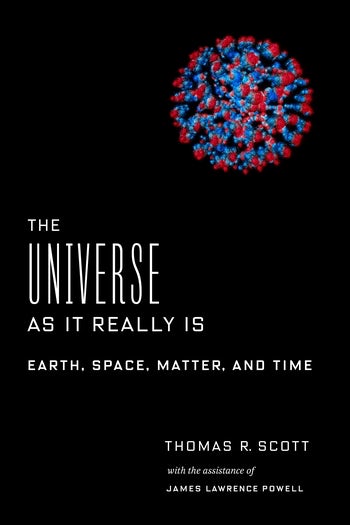 The Universe as It Really Is

Thomas R. Scott, with the assistance of James Lawrence Powell

The universe that science reveals to us can seem far outside the comfort zone of the human mind. Subjects near and far open up dizzying vistas, from the infinitesimal to the colossal. Humanity, the unlikely product of uncountable coincidences on unimaginable scales, inhabits a tumultuous universe that extends from our immediate environs to the most distant galaxies and beyond. But when the mind balks at the vertiginous complexity of the universe, science unveils the elegance amid the chaos.

In this book, Thomas R. Scott ventures into the known and the unknown to explain our universe and the laws that govern it. The Universe as It Really Is begins with physics and the building blocks of the universe—time, gravity, light, and elementary particles—and chemistry’s ability to explain the interactions among them. Scott, with the assistance of James Lawrence Powell, next tours the earth and atmospheric sciences to explain the forces that shape our planet and then takes off for the stars to describe our place in the cosmos. He provides vivid introductions to our collective scientific inheritance, narrating discoveries such as the shape of the atom and the nature of the nucleus or how we use GPS to measure time and what that has to do with relativity. A clear demonstration of the power of scientific reasoning to bring the incomprehensible within our grasp, The Universe as It Really Is gives an engrossing account of just how much we do understand about the world around us.

Evocative of Sagan’s The Demon-Haunted World, Thomas R. Scott’s book is a breezy yet comprehensive and authoritative treatise on the science underlying our universe, our world, and our place in it. Michael Mann, Distinguished Professor, Penn State University and coauthor of The Madhouse Effect: How Climate Change Denial is Threatening the Planet, Destroying Our Politics, and Driving Us Crazy

The Universe as It Really Is offers an excellent vision of the natural history of the cosmos. With the impressive breadth of topics, the reader gains a clear sense of the "big picture" of the natural world. Neil F. Comins, author of The Traveler's Guide to Space: For One-Way Settlers and Round-Trip Tourists

A delightful, well-written tour of the universe. Scott covers a lot, from seafloor spreading to supernovas twinkling brightly in the sky. Now more than ever, we need citizens to stand up for sound science, not some convenient ideological take on it. The Universe as It Really Is tells readers how the real universe works and how we know it. What a pleasure it is to recommend this book! Harry Shipman, Annie Jump Cannon Professor Emeritus, University of Delaware

This excellent, accessible guide from Scott . . . allows readers to acquaint themselves with the basic facts, history, and key figures of multiple physical sciences in a single volume. Scott presents a wide range of scientific fact and history in a way that will delight and inform readers. Publishers Weekly

An excellent work for readers of all levels. Highly recommended. Choice

List of Illustrations
Preface
About the Author and This Work
Introduction
1. It’s Elementary
2. Getting Together: Atoms to Molecules
3. Gravity
4. Time
5. Light
6. Earth: A Biography
7. Earth: A Physical Exam
8. Atmosphere and Weather
9. Oceans
10. The Sun
11. The Solar System
12. The Milky Way
13. The Cosmos
Notes
Bibliography
Index

Thomas R. Scott (1944–2017) was professor emeritus of psychology and academic vice president emeritus at San Diego State University, where he also served as dean of the College of Sciences, vice president for research, dean of the Graduate Division, and chief executive officer of the SDSU Research Foundation.

James Lawrence Powell is executive director of the National Physical Science Consortium. He previously served on the National Science Board and has also been president of Franklin and Marshall College, Reed College, the Franklin Institute Science Museum in Philadelphia, and the Los Angeles County Museum of Natural History. Powell is the author of The Inquisition of Climate Science (2011) and Four Revolutions in the Earth Sciences: From Heresy to Truth (2014), both from Columbia University Press.