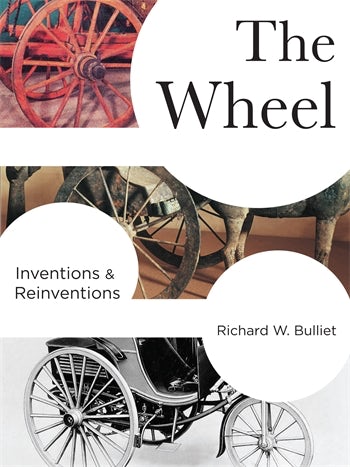 In this book, Richard W. Bulliet focuses on three major phases in the evolution of the wheel and their relationship to the needs and ambitions of human society. He begins in 4000 B.C.E. with the first wheels affixed to axles. He then follows with the innovation of wheels turning independently on their axles and concludes five thousand years later with the caster, a single rotating and pivoting wheel.

Bulliet's most interesting finding is that a simple desire to move things from place to place did not drive the wheel's development. If that were the case, the wheel could have been invented at any time almost anywhere in the world. By dividing the history of this technology into three conceptual phases and focusing on the specific men, women, and societies that brought it about, Bulliet expands the social, economic, and political significance of a tool we only partially understand. He underscores the role of gender, combat, and competition in the design and manufacture of wheels, adding vivid imagery to illustrate each stage of their development.

This is a wonderful book, brimming at once with fascinating tales and with fundamental insights into the nature of invention. Patrick Manning, Andrew W. Mellon Professor of World History, University of Pittsburgh

This concise and well-executed work is technology history at its best.... Simply excellent, this work will appeal not just to history readers but also to those interested in the social and cultural developments that both fuel and are fueled by technical changes. Library Journal (starred review)

A fine contribution to the history of transport. Journal of Interdisciplinary History

Bulliet brings a fresh view to a story that interests many: the invention of the wheel, providing new and interesting details about when and why the wheel was first adopted. Hermione Giffard, History Today

This clearly written, beautifully illustrated, and well-argued book ought to be read by every historian of technology. David E. Nye, Technology and Culture

A fluently-written, richly illustrated popular science history of the wheel as a transport device. Technik geschichte

Acknowledgments
1. Wheel Versus Wheel
2. Why Invent the Wheel?
3. A Square Peg in a Round Wheel
4. Home on the Range
5. Wheels for Show
6. The Rise and Demise of the Charioteer
7. The Princess Ride
8. The Carriage Revolution
9. Four Wheels in China
10. Rickshaw Cities
11. The Third Wheel
Notes
Glossary
Further Reading
Index

Read an excerpt from "Wheel Versus Wheel," the first chapter of The Wheel:

Richard W. Bulliet taught Middle Eastern history and the history of technology at Columbia University from 1976 to 2015. He is the author of Cotton, Climate, and Camels in Early Islamic Iran: A Moment in World History; Hunters, Herders, and Hamburgers: The Past and Future of Human-Animal Relationships; The Case for Islamo-Christian Civilization; Islam: The View from the Edge; and The Camel and the Wheel.