Theory of Literature and Other Critical Writings 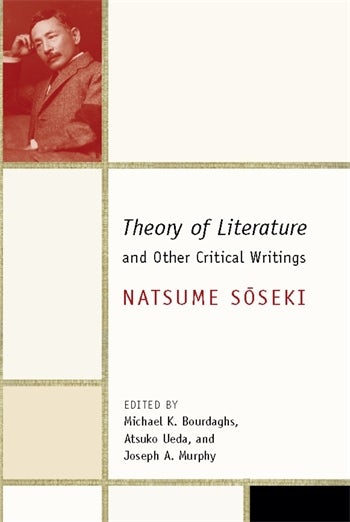 Theory of Literature and Other Critical Writings

Natsume Soseki (1867-1916) was the foremost Japanese novelist of the twentieth century, known for such highly acclaimed works as Kokoro, Sanshiro, and I Am a Cat. Yet he began his career as a literary theorist and scholar of English literature. In 1907, he published Theory of Literature, a remarkably forward-thinking attempt to understand how and why we read. The text anticipates by decades the ideas and concepts of formalism, structuralism, reader-response theory, and postcolonialism, as well as cognitive approaches to literature that are only now gaining traction.

Employing the cutting-edge approaches of contemporary psychology and sociology, Soseki created a model for studying the conscious experience of reading literature as well as a theory for how the process changes over time and across cultures. Along with Theory of Literature, this volume reproduces a later series of lectures and essays in which Soseki continued to develop his theories. By insisting that literary taste is socially and historically determined, Soseki was able to challenge the superiority of the Western canon, and by grounding his theory in scientific knowledge, he was able to claim a universal validity.

For fans of one of Japan's greatest novelists (Kokoro, Kusamakura) this volume of his literary criticism offers insights into his fiction as well as some prescient ideas about realism and multiculturalism. Bill Marx, Public Radio International's The World Books

An impressive work of remarkable erudition matched by the precision and lucidity with which the complexity of Soseki's thought and of its context are presented. Maria Flutsch, Japanese Studies

Three cheers for bringing this Soseki to us! Angela Yu, Monumenta Nipponica

A revelation.... The editors deftly explore Soseki's connection with major currents in Western literary theory, philosophy, and social and natural science.... An important and impressive contribution to the field of Japanese literary studies and to the ever-expanding domain of 'Sosekiana.' Journal of Asian Studies

There are treasures to be mined in this book — insights into Soseki the man, Soseki the writer, Soseki the product of his time. Michael Hoffman, Japan Times

Winner, 2011 Aldo and Jeanne Scaglione Prize for a Translation of a Scholarly Study of Literature

Natsume Soseki (1867-1916) was the foremost Japanese novelist of the Meiji Era, known for his books Kokoro, Botchan, and I Am a Cat.

Michael Bourdaghs is associate professor of modern Japanese literature at the University of Chicago. He is the author of The Dawn That Never Comes: Shimazaki Toson and Japanese Nationalism and the translation editor of Kamei Hideo's Transformations of Sensibility: The Phenomenology of Meiji Literature.

Atsuko Ueda is assistant professor of East Asian studies at Princeton University and the author, most recently, of Concealment of Politics, Politics of Concealment.

Joseph A. Murphy is associate professor of languages, literatures, and cultures at the University of Florida and author of The Metaphorical Circuit: Negotiating the Gap Between Literature and Science in Twentieth-Century Japan. His recent work concerns the cognitive basis of narrative comprehension and includes an article in the volume Cognition and Literature, forthcoming from Yale University Press.