This Incredible Need to Believe 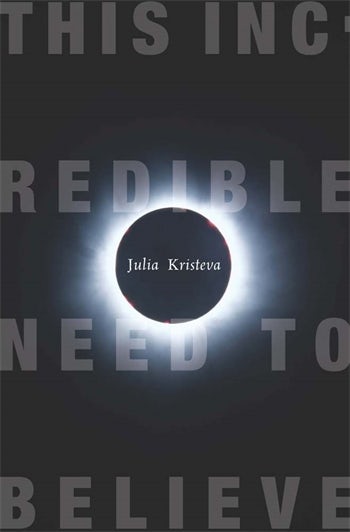 This Incredible Need to Believe

"Unlike Freud, I do not claim that religion is just an illusion and a source of neurosis. The time has come to recognize, without being afraid of 'frightening' either the faithful or the agnostics, that the history of Christianity prepared the world for humanism."

So writes Julia Kristeva in this provocative work, which skillfully upends our entrenched ideas about religion, belief, and the thought and work of a renowned psychoanalyst and critic. With dialogue and essay, Kristeva analyzes our "incredible need to believe"--the inexorable push toward faith that, for Kristeva, lies at the heart of the psyche and the history of society. Examining the lives, theories, and convictions of Saint Teresa of Avila, Sigmund Freud, Donald Winnicott, Hannah Arendt, and other individuals, she investigates the intersection between the desire for God and the shadowy zone in which belief resides.

Kristeva suggests that human beings are formed by their need to believe, beginning with our first attempts at speech and following through to our adolescent search for identity and meaning. Kristeva then applies her insight to contemporary religious clashes and the plight of immigrant populations, especially those of Islamic origin. Even if we no longer have faith in God, Kristeva argues, we must believe in human destiny and creative possibility. Reclaiming Christianity's openness to self-questioning and the search for knowledge, Kristeva urges a "new kind of politics," one that restores the integrity of the human community.

Nowhere else does Julia Kristeva provide such a sustained treatment of her views on religion. Kristeva scholars and students will find this book an indispensable text. Noelle McAfee, George Mason University

A focused and insightful discussion of religious belief... compelling and remarkable. Publishers Weekly

In this book, Julia Kristeva analyzes various pressing issues of our time, including the crisis in the Middle East, terrorism, depression, anorexia, and addiction, along with a general crisis of meaning. With her customary brilliance, she argues that belief and faith make it possible to speak but also to question. Provocatively, she describes a vein of Christianity and Catholicism that open up rather than close down that infinite questioning, which she maintains is necessary to delay the death drive. Here, Kristeva uses her incisive psychoanalytic acumen to diagnose the 'culture wars' and the 'clash of religions' that threaten world peace. Kelly Oliver, Vanderbilt University, and editor of The Portable Kristeva

A helpful commentary and introduction to Kristeva's major work over the last two decades... recommended. Choice

Readers... will be exposed to an impressive... crystallization of [Kristeva's] religious and psychoanalytic thought. Elaine P. Zicker, Bryn Mawr Review of Comparative Literature

The Big Question Mark (in Guise of a Preface)
This Incredible Need to Believe: Interview with Carmine Donzelli
From Jesus to Mozart: Christianity's Difference?
"Suffering": Lenten Lectures, March 19, 2006
The Genius of Catholicism
Don't Be Afraid of European Culture
Index

Julia Kristeva is professor of linguistics at the Université de Paris VII and the author of many acclaimed works and novels, including Murder in Byzantium, Strangers to Ourselves, New Maladies of the Soul, Time and Sense, Hannah Arendt, and Melanie Klein. She is the recipient of the Hannah Arendt Prize for Political Thought and the Holberg International Memorial Prize.

Beverley Bie Brahic is a translator and poet living in Paris and Stanford, California. In addition to the writing of Kristeva, she has translated the works of Hélène Cixous, Jacques Derrida, and Francis Ponge.