Time and the Generations

Population Ethics for a Diminishing Planet 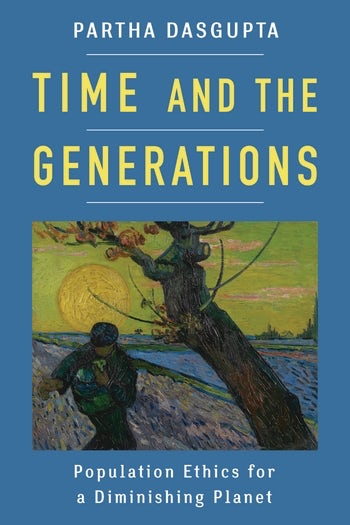 Time and the Generations

Population Ethics for a Diminishing Planet

How should we evaluate the ethics of procreation, especially the environmental consequences of reproductive decisions on future generations, in a resource-constrained world? While demographers, moral philosophers, and environmental scientists have separately discussed the implications of population size for sustainability, no one has attempted to synthesize the concerns and values of these approaches. The culmination of a half century of engagement with population ethics, Partha Dasgupta’s masterful Time and the Generations blends economics, philosophy, and ecology to offer an original lens on the difficult topic of optimum global population.

After offering careful attention to global inequality and the imbalance of power between men and women, Dasgupta provides tentative answers to two fundamental questions: What level of economic activity can our planet support over the long run, and what does the answer say about optimum population numbers? He develops a population ethics that can be used to evaluate our choices and guide our sense of a sustainable global population and living standards. Structured around a central essay from Dasgupta, the book also features a foreword from Robert Solow; correspondence with Kenneth Arrow; incisive commentaries from Joseph Stiglitz, Eric Maskin, and Scott Barrett; an extended response by the author to them; and a joint paper with Aisha Dasgupta on inequalities in reproductive decisions and the idea of reproductive rights. Taken together, Time and the Generations represents a fascinating dialogue between world-renowned economists on a central issue of our time.

With this wonderfully wide-ranging, brilliant, and generous book, Partha Dasgupta joins his admired mentor, Kenneth Arrow, in the elite band of economists who have appreciated and contributed to the philosophical underpinnings of their subject. The relationship goes both ways, for by bringing in an economist’s sense of ecological and biological realities, he is able to modify and transcend the contributions of philosophers such as Mill, Sidgwick, Ramsey, Rawls, and Parfit. The result is an astonishing monument to a lifetime of hard thought about population, sustainability, savings, and human welfare. Simon Blackburn, Bertrand Russell Professor Emeritus of Philosophy and fellow of Trinity College, Cambridge

In recent decades, we’ve seen human impacts on the biosphere surge far beyond sustainable levels, raising deeply vexing questions about the path ahead. With intellectual elegance and insight, Dasgupta delves into the moral, economic, and environmental dimensions of global population and living standards. This rigorous book opens a normative approach to the fraught choices confronting all of us. Gretchen Daily, Bing Professor of Environmental Science, Stanford University

What a book! Written with pellucid refinement and compelling responsibility, it incisively appraises humankind’s numbers in tandem with assessments of ecology, time, personal decisions, and varied social and economic circumstances. Composed at the frontiers of norms and methods, philosophy and economics, demography and social analysis, Time and the Generations offers a systematic and bracing homage to heterodox reason in the spirit of Kenneth Arrow. Ira Katznelson, Ruggles Professor of Political Science and History, Columbia University

A brilliant and original analysis of the population-consumption-environment nexus that will determine the quality of human futures on this troubled planet. This book will set the standard with which future discussions on this vital subject are conducted. Peter H. Raven, president emeritus, Missouri Botanical Garden

Time and the Generations is a fascinating and enlightening work. Partha Dasgupta and his interlocutors have created a captivating and challenging book. Menahem Yaari, S.A. Schonbrunn Professor Emeritus of Mathematical Economics, Hebrew University of Jerusalem

[Dasgupta] uses unique and original analysis of the link between environment, population and material consumption. Choice

Partha Dasgupta is Frank Ramsey Professor Emeritus of Economics at the University of Cambridge; a fellow of St John’s College, Cambridge; and visiting professor at the New College of the Humanities, London. His books include Human Well-Being and the Natural Environment (2001) and Economics: A Very Short Introduction (2007).