To the End of Revolution 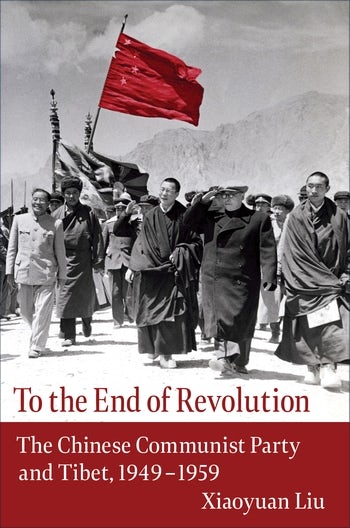 To the End of Revolution

The status of Tibet is one of the most controversial and complex issues in the history of modern China. In To the End of Revolution, Xiaoyuan Liu draws on unprecedented access to the archives of the Chinese Communist Party to offer a groundbreaking account of Beijing’s evolving Tibet policy during the critical first decade of the People’s Republic.

Liu details Beijing’s overarching strategy toward Tibet, the last frontier for the Communist revolution to reach. He analyzes how China’s new leaders drew on Qing and Nationalist legacies as they attempted to resolve a problem inherited from their predecessors. Despite acknowledging that religion, ethnicity, and geography made Tibet distinct, Beijing nevertheless forged ahead, zealously implementing socialist revolution while vigilantly guarding against real and perceived enemies. Seeking to wait out local opposition before choosing to ruthlessly crush Tibetan resistance in the late 1950s, Beijing eventually incorporated Tibet into its sociopolitical system. The international and domestic ramifications, however, are felt to this day.

Liu offers new insight into the Chinese Communist Party’s relations with the Dalai Lama, ethnic revolts across the vast Tibetan plateau, and the suppression of the Lhasa Rebellion in 1959. Placing Beijing’s approach to Tibet in the contexts of the Communist Party’s treatment of ethnic minorities and China’s broader domestic and foreign policies in the early Cold War, To the End of Revolution is the most detailed account to date of Chinese thinking and acting on Tibet during the 1950s.

Liu Xiaoyuan tells in exquisite detail, based on new archival sources, the dramatic story of how the PRC took over Tibet. Embracing multiple scales of time and space, he gives us a close-up view of how the PRC eliminated the autonomy of Tibet, and a wide-ranging exploration of its implications for global geopolitics. Must reading for students of China’s rise to world power. Peter C. Perdue, Yale University

An outstanding history of how the Chinese Communists turned Tibet into a problem of their own creation. Nobody will be able to understand current Chinese decision-making on Tibet without grasping how concepts of borders and territoriality were remade in the wake of the Chinese revolution. O. A. Westad, author of Restless Empire: China and the World since 1750

Perhaps no issue has been more controversial and damaging to China’s international image than its policies in Tibet. Why did the “New China” of the Communist Party move so quickly from accommodation to occupation in Tibet? How were its policies shaped by political tensions abroad and at home? What can this tragic history tell us about continuities in Chinese strategies toward religious and ethnic minorities over time and space? Xiaoyuan Liu is a master historian who has pursued masterly research in Chinese and international archives. This book will be read and cited by scholars of Chinese politics and history. It is required reading for any who seek to understand the origins of Tibet’s modern misfortune. William C. Kirby, Harvard University

Introduction
1. A Protracted Agenda
2. The “Dalai Line”
3. A Time to Change
4. A New Phase
5. A Waiting Game
6. The Showdown
Epilogue: Tibet and the World, According to Beijing

Xiaoyuan Liu is David Dean 21st Century Professor of Asian Studies at the University of Virginia and Zijiang Visiting Professor at East China Normal University. His books include Frontier Passages: Ethnopolitics and the Rise of Chinese Communism, 1921–1945 (2004) and Reins of Liberation: An Entangled History of Mongolian Independence, Chinese Territoriality, and Great Power Hegemony, 1911–1950 (2006).