Toward a Just Society 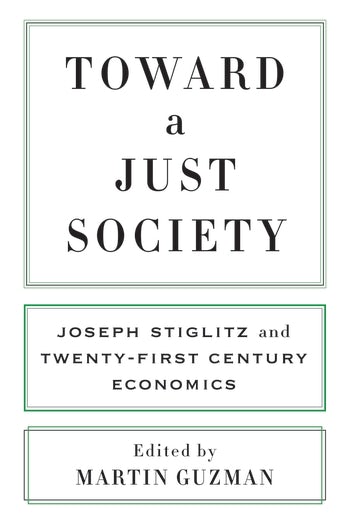 Toward a Just Society

Joseph Stiglitz is one of the world’s greatest economists. He has made fundamental contributions to economic theory in areas such as inequality, the implications of imperfect and asymmetric information, and competition, and he has been a major figure in policy making, a leading public intellectual, and a remarkably influential teacher and mentor. This collection of essays influenced by Stiglitz’s work celebrates his career as a scholar and teacher and his aspiration to put economic knowledge in the service of creating a fairer world.

Toward a Just Society brings together a range of essays whose breadth reflects how Stiglitz has shaped modern economics. The contributions to this volume, all penned by high-profile authors who have been guided by or collaborated with Stiglitz over the last five decades, span microeconomics, macroeconomics, inequality, development, law and economics, and public policy. Touching on many of the central debates and discoveries of the field and providing insights on the directions that academic economics could take in the future, Toward a Just Society is an extraordinary celebration of the many paths Stiglitz has opened for economics, politics, and public life.

Joe Stiglitz has touched almost every part of economic theory and economic practice, and every part he has touched is livelier for his influence. The great variety and high quality of the essays in this book are a fitting response to his fertility and energy. Robert Solow, Massachusetts Institute of Technology

Joseph Stiglitz is a national treasure—a distinguished scholar with a Nobel Prize in Economics, a policy maker who played a key role in U.S. economic policy, and a teacher who has profoundly shaped the scholarship and values of his students. The essays in this volume attest to Joe’s enduring success in shaping economic research and dialogue and linking this research to ethical and real world issues. Joan E. Spero, Columbia University

This volume is filled with essays by a collection of brilliant scholars who share one thing in common: They were all mentored by Joseph E. Stiglitz. Stiglitz taught more than economics; he taught courage and creativity. These authors are the evidence of his success. Robert Johnson, president, Institute for New Economic Thinking

Economics is often derided as ‘the dismal science’ or technical abstraction. But Joe Stiglitz’s lifetime work has shone a light on distributive justice through economic reasoning. In this extraordinary volume, thirty leading economists examine inequality, networks, and public policy. Toward a Just Society is essential reading for economists and policy professionals. Glenn Hubbard, dean and Russell L. Carson Professor of Finance and Economics, Columbia Business School, and former chairman of the U.S. Council of Economic Advisers

Joseph Stiglitz is one of the greatest economists of our day, and in his breadth and depth of influence in economics he has few rivals. This volume offers useful reviews and critiques of the many subfields Stiglitz has contributed to. Faculty, students, policy makers, and journalists will all appreciate this volume. Steven Cassou, Kansas State University

Joseph Stiglitz's fundamental belief that more equality and more dignity are possible for all shines through in Toward a Just Society. This conversation among generations of Stiglitz’s students and coauthors perfectly celebrates his career as scholar, teacher, and public servant. With groundbreaking work on everything from rents and inequality to the cost of war, this is a fitting testament to the life of the mind and a life well-lived. Felicia Wong, president and CEO, Roosevelt Institute

Preface, by Joseph E. Stiglitz
Introduction, by Martin Guzman
Part I. Inequality
1. A Firm-Level Perspective on the Role of Rents in the Rise in Inequality, by Jason Furman and Peter Orszag
2. Parents, Children, and Luck: Equality of Opportunity and Equality of Outcome, by Ravi Kanbur
3. The Middle Muddle: Conceptualizing and Measuring the Global Middle Class, by Arjun Jayadev, Rahul Lahoti, and Sanjay Reddy
Part II. Microeconomics
4. Companies Are Seldom as Good or as Bad as They Seem at the Time, by Gary Smith
5. What’s So Special About Two-Sided Markets?, by Benjamin E. Hermalin and Michael L. Katz
6. Missing Money and Missing Markets in the Electricity Industry, by David Newbery
Part III. Macroeconomics
7. Thoughts on DSGE Macroeconomics: Matching the Moment, But Missing the Point?, by Anton Korinek
8. The “Schumpeterian” and the “Keynesian” Stiglitz: Learning, Coordination Hurdles, and Growth Trajectories, by Giovanni Dosi and Maria Enrica Virgillito
9. Deleterious Effects of Sustained Deficit Spending, by Edmund Phelps
10. The Rediscovery of Financial Market Imperfections, by John C. Williams
11. Ambiguity and International Risk Sharing, by Brian Hill and Tomasz Michalski
Part IV. Networks
12. Use and Abuse of Network Effects, by Hal Varian
13. Financial Contagion Revisited, by Franklin Allen and Douglas Gale
14. The Economics of Information and Financial Networks, by Stefano Battiston
Part V. Development
15. Joseph Stiglitz and China’s Transition Success, by Justin Yifu Lin
16. The Sources of Chinese Economic Growth Since 1978, by Lawrence J. Lau
17. Knowledge as a Global Common and the Crisis of the Learning Economy, by Ugo Pagano
Part VI. Law and Economics
18. Conservatism and Switcher’s Curse, by Aaron Edlin
19. The “Inner Logic” of Institutional Evolution: Toward a Theory of the Relationship Between Formal and “Informal” Law, by Antara Haldar
Part VII. Public Policies
20. Joe Stiglitz and Representative and Equitable Global Governance, by José Antonio Ocampo
21. The Fiscal Opacity Cycle: How America Hid the Costs of the Wars in Iraq and Afghanistan, by Linda J. Bilmes
22. It Works in Practice, But Would It Work in Theory? Joseph Stiglitz’s Contribution to Our Understanding of Income Contingent Loans, by Bruce Chapman
23. The Public Economics of Long-Term Care, by Pierre Pestieau and Gregory Ponthiere
24. Jomo E. Stiglitz: Kenya’s First Nobel Laureate in Economics, by Célestin Monga
List of Contributors
Index

Martin Guzman is an economist based at the Columbia University Graduate School of Business and an associate professor of economics at the University of Buenos Aires. He is a leading economist in the field of public debt crisis resolution and is one of Joseph Stiglitz’s closest collaborators in the fields of macroeconomic theory and economic development.