The History and Future of Freedom of Information 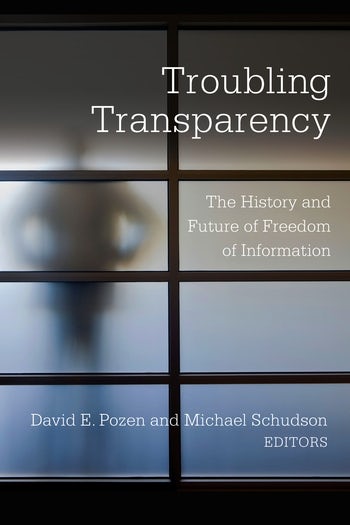 The History and Future of Freedom of Information

Today, transparency is a widely heralded value, and the U.S. Freedom of Information Act (FOIA) is often held up as one of the transparency movement’s canonical achievements. Yet while many view the law as a powerful tool for journalists, activists, and ordinary citizens to pursue the public good, FOIA is beset by massive backlogs, and corporations and the powerful have become adept at using it for their own interests. Close observers of laws like FOIA have begun to question whether these laws interfere with good governance, display a deleterious anti-public-sector bias, or are otherwise inadequate for the twenty-first century’s challenges.

Troubling Transparency brings together leading scholars from different disciplines to analyze freedom of information policies in the United States and abroad—how they are working, how they are failing, and how they might be improved. Contributors investigate the creation of FOIA; its day-to-day uses and limitations for the news media and for corporate and citizen requesters; its impact on government agencies; its global influence; recent alternatives to the FOIA model raised by the emergence of “open data” and other approaches to transparency; and the theoretical underpinnings of FOIA and the right to know. In addition to examining the mixed legacy and effectiveness of FOIA, contributors debate how best to move forward to improve access to information and government functioning. Neither romanticizing FOIA nor downplaying its real and symbolic achievements, Troubling Transparency is a timely and comprehensive consideration of laws such as FOIA and the larger project of open government, with wide-ranging lessons for journalism, law, government, and civil society.

Is transparency part of the solution or part of the problem of modern democracy? Bringing together some of the world’s leading scholars and practitioners of transparency law, this volume reassesses where we stand fifty years after enactment of the Freedom of Information Act. Its essays offer critical reflections, affirmative fixes, and comparative evaluations, ultimately shedding invaluable light on the romantic notion that sunlight is the best disinfectant. David Cole, National Legal Director, ACLU, Professor, Georgetown University Law Center

A breakthrough volume, which stops treating transparency as an obvious good and looks carefully at its costs as well as its benefits. These are the careful studies we’ve been waiting for. Jane Mansbridge, Harvard University

An essential intervention that collects the best thinking on the complex relationship between transparency and democracy. Tim Wu, Columbia University

Troubling Transparency comprises the most important contemporary scholarship on FOIA and its place in the ecosystem of government transparency. Each chapter provides a fresh, often bracing perspective on FOIA’s foundations, its functions, and whether it is serving the lofty democratic and good-government objectives that it was meant to advance. Essential reading for any scholar of government secrecy or accountability. Jonathan Manes, University at Buffalo

Acknowledgments
Introduction: Troubling Transparency, by David E. Pozen and Michael Schudson
Part I: FOIA’s Historical and Conceptual Foundations
1. How Administrative Opposition Shaped the Freedom of Information Act, by Sam Lebovic
2. Positive Rights, Negative Rights, and the Right to Know, by Frederick Schauer
3. FOIA as an Administrative Law, by Mark Fenster
Part II: FOIA and the News Media
4. The Other FOIA Requesters, by Margaret B. Kwoka
5. State FOI Laws: More Journalist-Friendly, or Less?, by Katherine Fink
6. FOIA and Investigative Reporting: Who’s Asking What, Where, and When—and Why It Matters, by James T. Hamilton
Part III: Theorizing Transparency Tactics
7. The Ecology of Transparency Reloaded, by Seth F. Kreimer
8. Monitoring the U.S. Executive Branch Inside and Out: The Freedom of Information Act, Inspectors General, and the Paradoxes of Transparency, by Nadia Hilliard
9. Output Transparency vs. Input Transparency, by Cass R. Sunstein
10. Open Data: The Future of Transparency in the Age of Big Data, by Beth Simone Noveck
11. Striking the Right Balance: Weighing the Public Interest in Access to Agency Records Under the Freedom of Information Act, by Katie Townsend and Adam A. Marshall
Part IV: Comparative Perspectives
12. The Global Influence of the United States on Freedom of Information, by Kyu Ho Youm and Toby Mendel
13. Transparency as Leverage or Transparency as Monitoring? U.S. and Nordic Paradigms in Latin America, by Gregory Michener
14. Structural Corruption and the Democratic-Expansive Model of Transparency in Mexico, by Irma Eréndira Sandoval-Ballesteros
List of Contributors
Index

David E. Pozen is a professor of law at Columbia Law School and an internationally noted scholar of constitutional law and informational law. Pozen served as the inaugural visiting scholar at the Knight First Amendment Institute at Columbia University during the 2017–2018 academic year.

Michael Schudson is a professor of journalism at the Columbia Journalism School. A MacArthur Foundation fellow, he is the author of eight books, including, most recently, The Rise of the Right to Know: Politics and the Culture of Transparency, 1945–1975 (2015).