Politics and Economics in a Volatile World 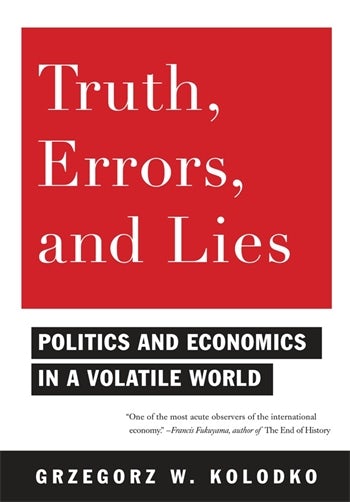 Politics and Economics in a Volatile World

Grzegorz W. Kolodko, one of the world's leading authorities on economics and development policy and a key architect of Poland's successful economic reforms, applies his far-reaching knowledge to the past and future of the world economy, introducing a framework for understanding our global situation that transcends any single discipline or paradigm.

Deploying a novel mix of scientific evaluation and personal observation, Kolodko begins with a brief discussion of misinformation and its perpetuation in economics and politics. He criticizes the simplification of complex economic and social issues and investigates the link between developments in the global economy and cultural change, scientific discoveries, and political fluctuations. Underscoring the necessity of conceptual and theoretical innovation in understanding our global economic situation, Kolodko offers a provocative study of globalization and the possibility of coming out ahead in an era of worldwide interdependence. Deeply critical of neoliberalism, which sought to transfer economic control exclusively to the private sector, Kolodko explores the virtues of social-economic development and the new rules of the economic game. He concludes with a look at our near and distant future, questioning whether we have a say in its making.

They used to say in Warsaw of the globetrotting, four-time Finance Minister and Deputy Prime Minister, "God is everywhere. Kolodko's already been there." In his latest book Truth, Error, and Lies, Grzegorz W. Kolodko takes us on a breathtaking journey through territories, centuries, and disciplines, including some formerly uncharted, at nerve-wracking speed. One will always be entertained, inspired, and enlightened. D. Mario Nuti, University of Rome La Sapienza

Truth, Errors, and Lies distills lessons for development learned from a whole life of work and observations by a thinker and practitioner of economic transition and real-world politics. Justin Yifu Lin, chief economist and senior vice president of the World Bank

Kolodko has been an important player in the transition of the Polish economy and has wide experience and original insights into themes and trends in the international economy. Every reader with an interest in economic development can benefit from reading this book. Robert A. Mundell, Nobel laureate in economic sciences

Kolodko astounds the reader with his erudition and, something of immeasurable value in a book on economics, never permits him to become bored. Thanks to the successful marriage of economics, history, sociology, politics, and literature, Truth, Errors, and Lies is light reading but not devoid of theoretical gravity, ideal for the beach and, at the same time, just right for a university seminar. Le Monde Diplomatique

This huge canvas depicting recent developments in economic policy is an outcry against the neoliberalism that dominated policymaking in the last quarter of the twentieth century and a hopeful assessment of the departures in economic thinking over the past two decades. Although I do not agree with Kolodko that the neoliberals have a monopoly on lying and the neo-left are pure in heart, I believe this book is a valuable meditation on the heterodox approach to economic policy now springing up across the world. Edmund S. Phelps, Nobel laureate in economic sciences

Grzegorz Kolodko has written an extraordinarily wide-ranging and thought-provoking book. It is easy to disagree with parts of his argument. But the book makes plain not only the scale of the challenges humanity now confronts but the potential for humane, pragmatic and co-operative solutions. Martin Wolf, chief economics commentator at the Financial Times

The book is splendidly written, brimming with riches, and, like the Bible, can be studied from beginning to end and from end to beginning. Janusz Czapinski

Books of a similar nature to "Truth, Errors and Lies: Politics and Economics in a Volatile World" include Alvin Toffler's "Future Shock," published in 1970, and Francis Fukuyama's "1989 The End of History"...The whole civilized world talked about them...This book will play a similar role. Andrew Ziemski

In a world that focuses on trees or even on the barks of the trees, Professor Kolodkobook deals with all the forests of the world, and not only the forests of today but alsothose of the past and the future. Professor Vito Tanzi, Former Director of Fiscal Affairs Department, IMF

Professor Kolodko is certainly very outspoken; he does not mince words. My own specialty is theory,which inter alia is meant to inform policy; the book gets directly at the policy matters themselves. Robert J. Aumann, Hebrew University, Nobel Prize Laureate in Economic Sciences

Grzegorz Kolodko – an economist who sets out in pursuit of the volatile world to unravel the nexusof humanity's concerns – is not daunted by the complexity of the task. His ever-vigilant optimism cutsthrough the conundrum and leads him to boldly denounce conformism, hypocrisy and opportunistic thinking. Aided by his knowledge, practical experience and erudition of a humanist equally at home with Hafez, Montaigneor Orwell, he wields with panache his narrative spiced with anecdote and irony. A real tour de force! Jozef Hen, writer

But this book is well worth reading, even if you disagree with its arguments and dislike its conclusions. Eastern Approaches - Economist blog

The Navigator
1: The World, by Words
2: How Things Happen: Economic Processes—What Science, by Policy
3: A Brief History of the World and What We Can Learn from It: Why Some Countries Are Wealthy and Others Poor, by and Whether It Must Always Be So
4: Globalization—and Then What? Where Globalization Originated and How to Come Out Ahead in the Era of Worldwide Interdependence
5: The World As It Is: How People Are Coping in Various Corners of a Changing World
6: The Withering of Neoliberalism and Its Tattered Legacy: Why a Harmful Concept Rose to Temporary Ascendancy in Half the World and What to Do about It
7: What Development Is and What It Depends On: Where Socioeconomic Development Comes from and How It Can Make Us Happy
8: Stagnation and Development—Institutions, by Policy
9: The Coincidence Theory of Development and the New Pragmatism: What Output Growth and Economic Development Depend On and How to Make Them Better
10: The Uncertain Future: What Awaits Us in the Near and Distant Future, by and What Say We Have in It
A Letter
Index

Grzegorz W. Kolodko was Poland's Deputy Prime Minister and Minister of Finance from 1994 to 1997 and from 2002 to 2003. He is now a professor of political economy at Kozminski University in Warsaw and has authored nearly forty books.