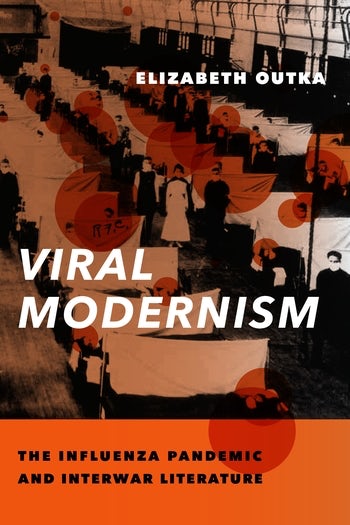 The influenza pandemic of 1918–1919 took the lives of between 50 and 100 million people worldwide, and the United States suffered more casualties than in all the wars of the twentieth and twenty-first centuries combined. Yet despite these catastrophic death tolls, the pandemic faded from historical and cultural memory in the United States and throughout Europe, overshadowed by World War One and the turmoil of the interwar period. In Viral Modernism, Elizabeth Outka reveals the literary and cultural impact of one of the deadliest plagues in history, bringing to light how it shaped canonical works of fiction and poetry.

Outka shows how and why the contours of modernism shift when we account for the pandemic’s hidden but widespread presence. She investigates the miasmic manifestations of the pandemic and its spectral dead in interwar Anglo-American literature, uncovering the traces of an outbreak that brought a nonhuman, invisible horror into every community. Viral Modernism examines how literature and culture represented the virus’s deathly fecundity, as writers wrestled with the scope of mass death in the domestic sphere amid fears of wider social collapse. Outka analyzes overt treatments of the pandemic by authors like Katherine Anne Porter and Thomas Wolfe and its subtle presence in works by Virginia Woolf, T. S. Eliot, and W. B. Yeats. She uncovers links to the disease in popular culture, from early zombie resurrection to the resurgence of spiritualism. Viral Modernism brings the pandemic to the center of the era, revealing a vast tragedy that has hidden in plain sight.

Elizabeth Outka answers a question that has hardly been asked, let alone answered: where is the flu in modernism? It is one of those books whose importance is written into its DNA. Adjusting our eyes so that we can see the shadowy presence of the pandemic, Outka gives us a new vision of modernism, vulnerable and embodied. Steeped in a rich and riveting archive, Viral Modernism offers transformative insights into the motivation and meaning of modernist texts, attuning us to the troubling ways illness can disappear from our cultural memory. Sarah Cole, author of Inventing Tomorrow: H. G. Wells and the Twentieth Century

How and why, asks Elizabeth Outka, have we missed “the viral tragedy within iconic modernist texts”? And what do we learn when we listen for it? Viral Modernism resuscitates the buried stories of the 1918–1919 influenza pandemic in relation to modernist literary form. The voices that surface through the exquisite readings of this well-researched, well-argued study offer insight not only into the tragic experience of this devastating disease but also into how those affected use literary and cultural forms to make sense of that experience, hence into the nature of storytelling itself. Priscilla Wald, author of Contagious: Cultures, Carriers, and the Outbreak Narrative

Viral Modernism is an elegantly written, penetrating study of how the influenza pandemic of 1918–1919 shaped modernist literature and society, most notably in Clarissa’s illnesses in Mrs. Dalloway; the burning thirst and drowning in The Waste Land; and the influence of Yeats’s stricken, pregnant wife as he wrote “The Second Coming.” Stephen Kern, author of The Culture of Time and Space, 1880-1918

Viral Modernism navigates deftly between history and literature and presents transformative readings of some of the most canonical high modernist works. Along the way, Elizabeth Outka offers a moving and harrowing account of the challenges the influenza pandemic posed to those who lived through it. Readers will talk about this book with friends and family, and the field will never be able to ignore the pandemic again. An extraordinary achievement. Celia Marshik, author of At the Mercy of Their Clothes: Modernism, the Middlebrow, and British Garment Culture

Elizabeth Outka is associate professor of English at the University of Richmond. She is the author of Consuming Traditions: Modernity, Modernism, and the Commodified Authentic (2009).