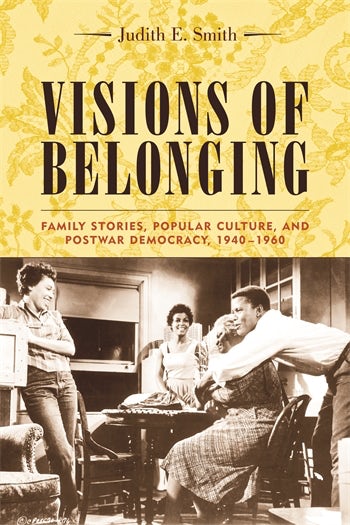 Visions of Belonging explores how beloved and still-remembered family stories—A Tree Grows in Brooklyn, I Remember Mama, Gentleman's Agreement, Death of a Salesman, Marty, and A Raisin in the Sun—entered the popular imagination and shaped collective dreams in the postwar years and into the 1950s. These stories helped define widely shared conceptions of who counted as representative Americans and who could be recognized as belonging.

The book listens in as white and black authors and directors, readers and viewers reveal divergent, emotionally textured, and politically charged social visions. Their diverse perspectives provide a point of entry into an extraordinary time when the possibilities for social transformation seemed boundless. But changes were also fiercely contested, especially as the war's culture of unity receded in the resurgence of cold war anticommunism, and demands for racial equality were met with intensifying white resistance. Judith E. Smith traces the cultural trajectory of these family stories, as they circulated widely in bestselling paperbacks, hit movies, and popular drama on stage, radio, and television.

Visions of Belonging provides unusually close access to a vibrant conversation among white and black Americans about the boundaries between public life and family matters and the meanings of race and ethnicity. Would the new appearance of white working class ethnic characters expand Americans'understanding of democracy? Would these stories challenge the color line? How could these stories simultaneously show that black families belonged to the larger "family" of the nation while also representing the forms of danger and discriminations that excluded them from full citizenship? In the 1940s, war-driven challenges to racial and ethnic borderlines encouraged hesitant trespass against older notions of "normal." But by the end of the 1950s, the cold war cultural atmosphere discouraged probing of racial and social inequality and ultimately turned family stories into a comforting retreat from politics.

The book crosses disciplinary boundaries, suggesting a novel method for cultural history by probing the social history of literary, dramatic, and cinematic texts. Smith's innovative use of archival research sets authorial intent next to audience reception to show how both contribute to shaping the contested meanings of American belonging.

Visions of Belonging is a monumental work of cultural history... Judith Smith has challenged the common wisdom... And made a powerful contribution. Elaine Tyler May, Journal of Interdisciplinary History

Smith's Visions of Belonging is a masterpiece of interdisciplinary scholarship. Research, narrative, and analysis are all exemplary, making the book a 'must read' on the topic of post-war American cultural and social history. Canadian Review of American Studies

[It] is full of vitality and is bound to be used, cited, and assigned to generations of students. Joseph Hawes, Journal of American History

Smith has written an important book that will serve as a great resource for historians of American postwar culture and politics. Renee Romano, American Historical Review

Judith E. Smith is professor of American studies at University of Massachusetts Boston and the author of Family Connections: A History of Italian and Jewish Immigrant Lives in Providence, Rhode Island, 1900-1940.