Voices of the New Arab Public 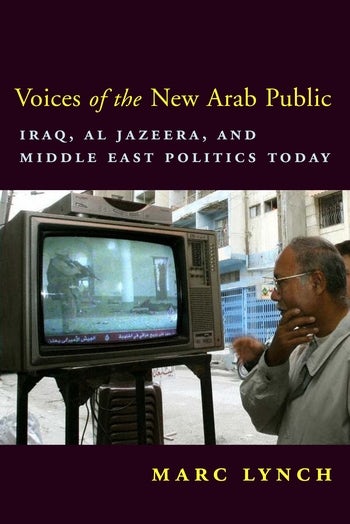 Voices of the New Arab Public

Al-Jazeera and other satellite television stations have transformed Arab politics over the last decade. By shattering state control over information and giving a platform to long-stifled voices, these new Arab media have challenged the status quo by encouraging open debate about Iraq, Palestine, Islamism, Arab identity, and other vital political and social issues. These public arguments have redefined what it means to be Arab and reshaped the realm of political possibility. As Marc Lynch shows, the days of monolithic Arab opinion are over. How Arab governments and the United States engage this newly confident and influential public sphere will profoundly shape the future of the Arab world.

Marc Lynch draws on interviews conducted in the Middle East and analyses of Arab satellite television programs, op-ed pages, and public opinion polls to examine the nature, evolution, and influence of the new Arab public sphere. Lynch, who pays close attention to what is actually being said and talked about in the Arab world, takes the contentious issue of Iraq-which has divided Arabs like no other issue-to show how the media revolutionized the formation and expression of public opinion. He presents detailed discussions of Arab arguments about sanctions and the 2003 British and American invasion and occupation of Iraq. While Arabs strongly disagreed about Saddam's regime, they increasingly saw the effects of sanctions as a potent symbol of the suffering of all Arabs. Anger and despair over these sanctions shaped Arab views of America, their governments, and themselves.

In Voices of the New Arab Public... Marc Lynch does an excellent job of appraising the impact of this change. Philip Seib, Dallas Morning News

No other has addressed the intersection between the media and the prospects for social change in such a meaningful way. Sally Bland, Jordan Times

This study is lucidly written, and an excellent discussion of the true nature of the Arab media and opinion... Highly recommended. Choice

A great read for readers who want a Western scholar's insight on the trends of the new Arab public. Tal Azran, Melbourne University, Meida International Australia

An empirically rich and challenging statement about the political effects of the "new media." International Journal of Middle East Studies

Read the chapter >"Iraq and the New Arab Public" (pdf)