The Creators and Corruptors of American Finance 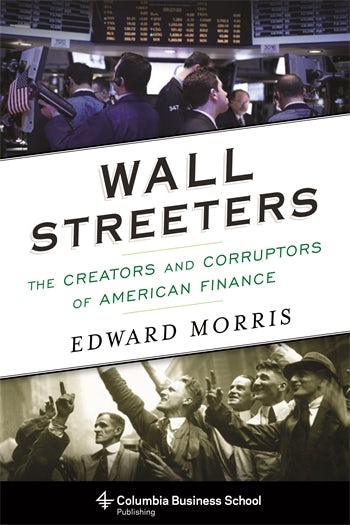 The Creators and Corruptors of American Finance

The 2008 financial collapse, the expansion of corporate and private wealth, the influence of money in politics—many of Wall Street's contemporary trends can be traced back to the work of fourteen critical figures who wrote, and occasionally broke, the rules of American finance.

Edward Morris plots in absorbing detail Wall Street's transformation from a clubby enclave of financiers to a symbol of vast economic power. His book begins with J. Pierpont Morgan, who ruled the American banking system at the turn of the twentieth century, and ends with Sandy Weill, whose collapsing Citigroup required the largest taxpayer bailout in history. In between, Wall Streeters relates the triumphs and missteps of twelve other financial visionaries. From Charles Merrill, who founded Merrill Lynch and introduced the small investor to the American stock market; to Michael Milken, the so-called junk bond king; to Jack Bogle, whose index funds redefined the mutual fund business; to Myron Scholes, who laid the groundwork for derivative securities; and to Benjamin Graham, who wrote the book on securities analysis. Anyone interested in the modern institution of American finance will devour this history of some of its most important players.

Wall Streeters is a long overdue book by a highly respected student of American finance. Readers of this book will develop a fuller understanding of how and why Wall Street has become what it is today. George H. Walker III, former chairman, Stifel, Nicolaus & Co. and former United States Ambassador to Hungary

Enjoyable to read, easy to understand, Wall Streeters is a compendium of the last 150 years of ups and downs in American finance. Ed Morris uses the informative lens of biography to bring this history alive, and they are all here, from the saints to the sinners. Along the way readers will learn the value of finance to our nation, despite Wall Street's problems. David Cowen, president, Museum of American Finance

Wall Streeters is a wonderful narrative review and an interesting read. This book will be very significant for students, academics, and investment professionals if they want to understand and learn from the mistakes of the past. Victor Ricciardi, Goucher College

A worthwhile read for those looking to understand the roots of the financial crisis and the present state of the economy. Publishers Weekly

[Morris] puts a human face on Wall Street.... Experienced Wall Streeters will enjoy this book. Students of finance should be required to read it. Brenda Jubin, Seeking Alpha

[A] retelling of the careers and the personalities... who formed today's world of high finance. Dale Singer, St. Louis Post-Dispatch

A fast and timely primer on how the U.S. got the financial markets it has today . . . [Wall Streeters] is a book that every college student, baby boomer and voter ought to read. Jim Prout, Financial History

Ed Morris is a professor of finance and former dean of the business school at Lindenwood University. Before beginning his teaching career, he was an investment banker and served as executive vice president of Stifel, Nicolaus, & Co. He has served on the boards of companies listed on the New York Stock Exchange, the American Stock Exchange, and NASDAQ.