The Cultural Politics of Left and Right 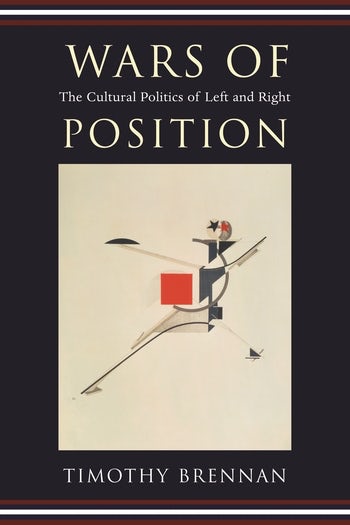 The Cultural Politics of Left and Right

Taking stock of contemporary social, cultural, and political currents, Timothy Brennan explores key turning points in the recent history of American intellectual life. He contends that a certain social-democratic vision of politics has been banished from public discussion, leading to an unlikely convergence of the political right and the academic left and a deadening of critical opposition. Brennan challenges the conventional view that affiliations based on political belief, claims upon the state, or the public interest have been rendered obsolete by the march of events in the years before and after Reagan. Instead, he lays out a new path for a future infused with a sense of intellectual and political possibility.

In highlighting the shift in America's intellectual culture, Brennan makes the case for seeing belief as an identity. As much as race or ethnicity, political belief, Brennan argues, is itself an identity-one that remains unrecognized and without legal protections while possessing its own distinctive culture. Brennan also champions the idea of cosmopolitanism and critiques those theorists who relegate the left to the status of postcolonial "other."

Wars of Position documents how alternative views were chased from the public stage by strategic acts of censorship, including within supposedly dissident wings of the humanities. He explores how the humanities entered the cultural and political mainstream and settled into an awkward secular religion of the "middle way." In a series of interrelated chapters, Brennan considers narratives of the fall of the Berlin Wall and the Clinton impeachment; reexamines Salman Rushdie's pre-fatwa writing to illuminate its radical social leanings; presents a startling new interpretation of Edward Said; looks at the fatal reception of Antonio Gramsci within postcolonial history and criticism; and offers a stinging critique of Hardt and Negri's Empire and the influence of Italian radicalism on contemporary cultural theory. Throughout the work, Brennan also draws on and critiques the ideas and influence of Heidegger, Lyotard, Kristeva, and other influential theorists.

Brennan's vigorously interrogative style dramatizes an unsettling yet productive skepticism, a sobering homeopathic injection into the current euphoria about the possibilities of globalization. American Book Review

Throughout Wars of Position, Brennan exhibits a remarkable knowledge of theoretical and historical traditions, and an ability to move across them with deftness,fluently summarizing deeply complex arguments. Joseph Keith, Postmodern Culture

Read the chapter, >"Nativism" from Wars of Position: The Cultural Politics of Left and Right (pdf)

Timothy Brennan is professor of comparative literature, cultural studies, and English at the University of Minnesota. He is the author of At Home in the World: Cosmopolitanism Now and Salman Rushdie and the Third World: Myths of the Nation.