What China and India Once Were

The Pasts That May Shape the Global Future 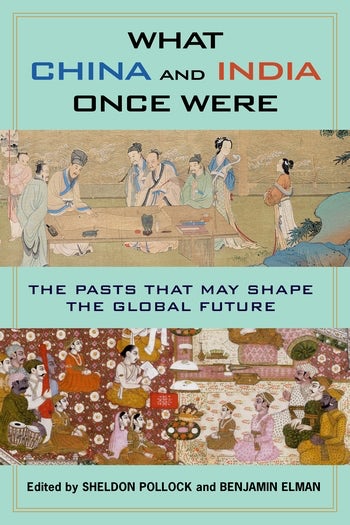 What China and India Once Were

The Pasts That May Shape the Global Future

In the early years of the twenty-first century, China and India have emerged as world powers. In many respects, this is a return to the historical norm for both countries. For much of the early modern period, China and India were global leaders in a variety of ways. In this book, prominent scholars seek to understand modern China and India through an unprecedented comparative analysis of their long histories.

Using new sources, making new connections, and reexamining old assumptions, noted scholars of China and India pair up in each chapter to tackle major questions by combining their expertise. What China and India Once Were details how these two cultural giants arrived at their present state, considers their commonalities and divergences, assesses what is at stake in their comparison, and, more widely, questions whether European modernity provides useful contrasts. In jointly composed chapters, contributors explore ecology, polity, gender relations, religion, literature, science and technology, and more, to provide the richest comparative account ever offered of China and India before the modern era. What China and India Once Were establishes innovative frameworks for understanding the historical and cultural roots of East and South Asia in global context, drawing on the variety of Asian pasts to offer new ways of thinking about Asian presents.

In one stroke, What China and India Once Were opens up a new realm of knowledge. This bold experiment in comparative history not only exposes many contemporary ideas and assumptions about India and China as parochial. It equips anyone interested in political economy, gender relations, religion, art, and literature with intellectual tools of remarkable subtlety and precision—the means to a profound and holistic understanding of two major countries that would decisively shape the world’s future. Pankaj Mishra, author of From the Ruins of Empire: The Revolt Against the West and the Remaking of Asia

Leading historians of early modern India and China come together in this volume to offer a series of wonderfully imaginative and sharply analytical studies of key aspects of these two large imperial formations. The result is a path-breaking volume which will be required reading for those interested in debates about ‘early modernity’ and their implications for understanding the origins of our own globalized world. Rosalind O'Hanlon, St. Cross College

What China and India Once Were makes an admirably far-ranging effort to compare the thought, political creativity, and institutions and social practices of these two great civilizations, which are now reentering the ranks of global powers. This insightful book could not be more timely. Alexander Woodside, University of British Columbia

This fascinating volume is the indispensable starting point for long range India-China comparisons. It is methodologically sophisticated, unfailingly intelligent in the historical insights it provides, broad in its coverage and generous in the range of its cultural sympathies. The distinguished group of contributors are all in top form. They draw on deep reservoirs of scholarship but wear their learning lightly and accessibly. It is a measure of the success of the volume that not only will India and China specialists learn about each other's area of scholarship, they will also learn much that is new about their own. It is a comparative history that is both acutely self aware of the challenges of the genre, but also restores a sense of enchantment to the enterprise. Pratap Bhanu Mehta, Ashoka University

A useful counter to the tendency to project from one case to the universal...Many readers, furthermore, will probably come to this book with a greater knowledge of one place than the other, the side-by-side analysis puts the lesser-known of the two countries in a more familiar context. Asian Review of Books

Preface
Maps
Introduction, by Benjamin Elman and Sheldon Pollock
Part I
1. Life and Energy, by Kenneth Pomeranz and Sumit Guha
2. Conquest, Rulership, and the State, by Pamela Crossley and Richard M. Eaton
3. Gender Systems: The Exotic Asian and Other Fallacies, by Beverly Bossler and Ruby Lal
Part II
4. Relating the Past: Writing (and Rewriting) History, by Cynthia Brokaw and Allison Busch
5. Sorting Out Babel: Literature and Its Changing Languages, by Stephen Owen and Sheldon Pollock
Part III
6. Big Science: Classicism and Conquest, by Benjamin Elman and Christopher Minkowski
7. Pilgrims in Search of Religion, by Zvi Ben-Dor Benite and Richard H. Davis
8. Art and Vision: Varieties of World Making, by Eugene Wang and Molly Aitken
Afterword: The Act of Comparing (Both Sides, Now), by Haun Saussy and Dipesh Chakrabarty
Chronology
Chinese and Indian Terms
List of Contributors
Index

Benjamin Elman is Gordon Wu ’58 Professor of Chinese Studies and professor of East Asian studies and history at Princeton University. His books include A Cultural History of Modern Science in China (2006) and Civil Examinations and Meritocracy in Late Imperial China (2013).

Sheldon Pollock is the Arvind Raghunathan Professor of South Asian Studies at Columbia University. His many publications include World Philology (2015) and A Rasa Reader: Classical Indian Aesthetics (Columbia, 2016). He is founding general editor of the Murty Classical Library of India.