What Does Europe Want?

The Union and Its Discontents 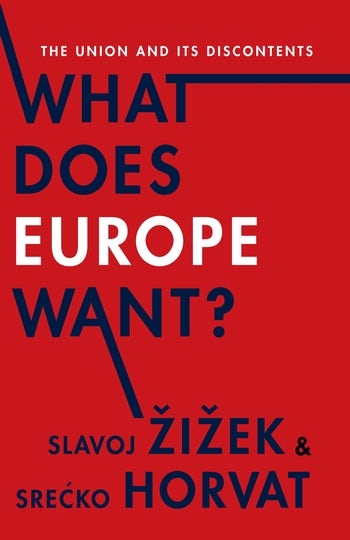 What Does Europe Want?

The Union and Its Discontents

Slavoj iek and Srecko Horvat combine their critical clout to emphasize the dangers of ignoring Europe's growing wealth gap and the parallel rise in right-wing nationalism, which is directly tied to the fallout from the ongoing financial crisis and its prescription of imposed austerity. To general observers, the European Union's economic woes appear to be its greatest problem, but the real peril is an ongoing ideological–political crisis that threatens an era of instability and reactionary brutality.

The fall of communism in 1989 seemed to end the leftist program of universal emancipation. However, nearly a quarter of a century later, the European Union has failed to produce any coherent vision that can mobilize people to action. Until recently, the only ideology receptive to European workers has been the nationalist call to "defend" against immigrant integration. Today, Europe is focused on regulating the development of capitalism and promoting a reactionary conception of its cultural heritage. Yet staying these courses, iek and Horvat show, only strips Europe of its power and stifles its political ingenuity. The best hope is for Europe to revive and defend its legacy of universal egalitarianism, which benefits all parties by preserving the promise of equal representation.

What Does Europe Want? deals with the crisis in a highly polemical and exciting way. One feels that one is involved in the discussions as they are taking place. This means that the text is highly readable but at the same time provides us with some important political, economic, and psychological background to many of the aspects of the crisis which tend to go unexamined or unreported. Peter Thompson, Sheffield

An outstanding book—radical in the best sense of the word. What Does Europe Want? gets to the root of the matter and gives political theory material force. Horvat is a rising star in philosophy, while iek is a theoretical tsunami. By reading the signs from the future, this book cuts through propaganda and ideological mystification to expose the increasing danger threatening the EU. Kelsey Wood, author of iek: A Reader's Guide

A Slovenian madman and a charismatic Croatian philosopher, joined by Greece's most dangerous politician, offer an analysis of the European deadlock in a way that is bitingly charming and bitterly intelligent. Any real European, faithful to the real idea of Europe, must read this. Oliver Stone, American film director, screenwriter, producer

The pages of this book resonate with the authors' powerful demolition of the EU's Orwellian propaganda. Readers who care about Europe have a duty to share in Slavoj iek and Srecko Horvat's energy, irrespectively of whether they agree with them or not. Yanis Varoufakis, author of The Global Minotaur: A Theory of the Global Crisis and Game Theory

How can we break, once and for all, the foundation of social apathy on which the construction of Europe since 1989 is built on? The active participation of the masses in politics is the only thing that can truly frighten the ruling elite in Europe and worldwide. And that's exactly why we should make it happen. Alexis Tsipras, Greek politican, president of SYRIZA

Full of relevance and merit...iek and Horvat provide a deeply engaging and insightful polemic on how Europe went wrong – and how it can recover. Publishers Weekly

Read the chapter, "Breaking Our Eggs Without the Omlette, From Cyprus to Greece, by Slavoj iek:

Slavoj Žižek (PhD, Philosophy, Ljubljana) is Senior Researcher at the Institute for Sociology and Philosophy at the University of Ljubljana, Global Distinguished Professor of German at New York University, and International Director of the Birkbeck Institute for the Humanities at the University of London. An internationally renowned psychoanalytic philosopher, cultural critic, and Hegelian Marxist, he is the author of numerous books, including Less than Nothing: Hegel and the Shadow of Dialectical Materialism (Verso, 2012) and Absolute Recoil: Towards a New Foundation of Dialectical Materialism (Verso, 2014).