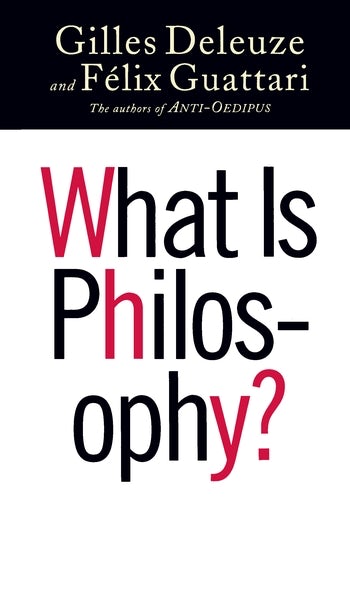 Called by many France's foremost philosopher, Gilles Deleuze is one of the leading thinkers in the Western World. His acclaimed works and celebrated collaborations with Félix Guattari have established him as a seminal figure in the fields of literary criticism and philosophy. The long-awaited publication of What Is Philosophy? in English marks the culmination of Deleuze's career.

Deleuze and Guattari differentiate between philosophy, science, and the arts, seeing as means of confronting chaos, and challenge the common view that philosophy is an extension of logic. The authors also discuss the similarities and distinctions between creative and philosophical writing. Fresh anecdotes from the history of philosophy illuminate the book, along with engaging discussions of composers, painters, writers, and architects.

A milestone in Deleuze's collaboration with Guattari, What Is Philosophy? brings a new perspective to Deleuze's studies of cinema, painting, and music, while setting a brilliant capstone upon his work.

Multiple beings, deterritorialized Earth, chaotic brains, artistic sensations: with these ideas, Deleuze and Guattari reach out to future "friends" of the concept, tired of worn-out philosophical gestures or conceptual moves, offering them a sense and a taste of what it means to try out new concepts and set things again in motion. John Rajchman, ArtForum International

A pleasure to read, this is a rigorous structural reflection of the philosophical concept and a genuine contribution to philosophy. Highly recommended. Choice

[An] important, highly original challenging book....As a result, the success of Deleuze's argument that we are Leibnizan is, in turn, compelling evidence for Foucault's suggestion that our century is Deleuzian. Because the action indeed takes place inside, readers of this journal should not overlook this evidence. Journal of Aesthetics and Art Criticism

Translators' Introduction
Introduction: The Question Then...
Part One. Philosophy
I. What Is a Concept?
2. The Plane of Immanence
3. Conceptual Personae
4. Geophilosophy
Part Two. Philosophy, Science, Logic, and Art
5. Functives and Concepts
6. Prospects and Concepts
7. Percept, Affect, and Concept
Conclusion: From Chaos to the Brain
Notes
Index

Gilles Deleuze was Professor of Philosophy at the University of Paris VIII. He died in November 1995. Among his many works are The Logic of Sense, Difference and Repetition, and Nietzche and Philosophy, all published by Columbia University Press.

Félix Guattari, a practicing psychoanalyst in Paris until his death in 1992, collaborated with Deleuze on four books, including Anti-Oedipus and A Thousand Plateaus.