When a Woman Becomes a Religious Dynasty

The Samding Dorje Phagmo of Tibet 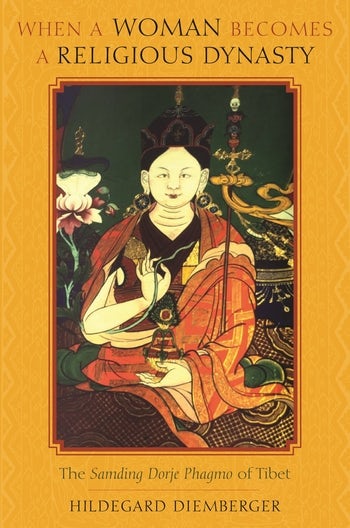 When a Woman Becomes a Religious Dynasty

The Samding Dorje Phagmo of Tibet

In the fifteenth century, the princess Chokyi Dronma was told by the leading spiritual masters of her time that she was the embodiment of the ancient Indian tantric deity Vajravarahi, known in Tibetan as Dorje Phagmo, the Thunderbolt Female Pig. After suffering a great personal tragedy, Chokyi Dronma renounced her royal status to become a nun, and, in turn, the tantric consort of three outstanding religious masters of her era. After her death, Chokyi Dronma's masters and disciples recognized a young girl as her reincarnation, the first in a long, powerful, and influential female lineage. Today, the twelfth Samding Dorje Phagmo leads the Samding monastery and is a high government cadre in the Tibet Autonomous Region.

Hildegard Diemberger builds her book around the translation of the first biography of Chokyi Dronma recorded by her disciples in the wake of her death. The account reveals an extraordinary phenomenon: although it had been believed that women in Tibet were not allowed to obtain full ordination equivalent to monks, Chokyi Dronma not only persuaded one of the highest spiritual teachers of her era to give her full ordination but also established orders for other women practitioners and became so revered that she was officially recognized as one of two principal spiritual heirs to her main master.

Diemberger offers a number of theoretical arguments about the importance of reincarnation in Tibetan society and religion, the role of biographies in establishing a lineage, the necessity for religious teachers to navigate complex networks of political and financial patronage, the cultural and social innovation linked to the revival of ancient Buddhist civilizations, and the role of women in Buddhism. Four introductory, stage-setting chapters precede the biography, and four concluding chapters discuss the establishment of the reincarnation lineage and the role of the current incarnation under the peculiarly contradictory communist system.

Exhibits that rare combination of meticulous historical research and lively prose in recounting a tale that is sure to intrigue readers. Holly Gayley, Buddhadharma

A significant contribution to Tibetan cultural history and gender studies. Amy Holmes-Tagchungdarpa, Journal of the American Academy of Religion

There are too many points of interest in this brilliant and often innovating book to be mentioned here. Anne Chayet, Historian

List of Illustrations
Foreword, by Marilyn Strathern
Preface
Acknowledgments
Introduction
Part I
1. The World of Chokyi Dronma
2. The Life of Chokyi Dronma
3. The Manuscript and Its Enigmas
4. Princess, Nun, Yogini
Part II
Translation of the Biography of the Venerable Chokyi Dronma
Part III
5. Succession and Spiritual Lineages: Meaning and Mysteries of Chokyi Dronma's Reincarnation
6. "Lady of the Lake": The Dorje Phagmo at Samding
7. Dorje Phagmo in the Twentieth Century: Embodied Divinity and Government Cadre
8. The Living Tradition and the Legacy of the Princess
Epilogue
Twin Reincarnation Line and Tentative Chronology
The Families of Chokyi Dronma
Notes
Bibliography
Index

Hildegard Diemberger is director of the Mongolia and Inner Asia Studies Unit and a fellow of Pembroke College at the University of Cambridge. She has published extensively on the anthropology of Tibet and the Himalayan regions and, with Pasang Wangdu, has coauthored the translations of the Shel dkar chos 'byung and the dBa' bzhed.