When Movies Were Theater

Architecture, Exhibition, and the Evolution of American Film 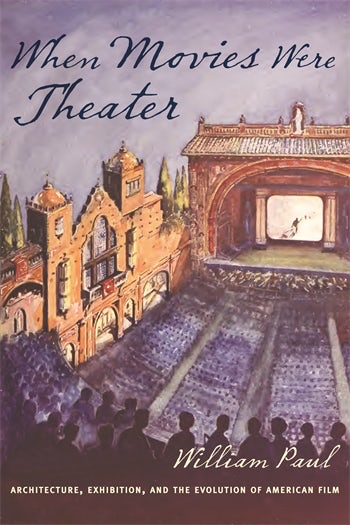 When Movies Were Theater

Architecture, Exhibition, and the Evolution of American Film

There was a time when seeing a movie meant more than seeing a film. The theater itself shaped the very perception of events on screen. This multilayered history tells the story of American film through the evolution of theater architecture and the surprisingly varied ways movies were shown, ranging from Edison's 1896 projections to the 1968 Cinerama premiere of Stanley Kubrick's 2001. William Paul matches distinct architectural forms to movie styles, showing how cinema's roots in theater influenced business practices, exhibition strategies, and film technologies.

Just as the very concept of 'going to the movies' in a theatrical space seems under threat and antiquated, William Paul's informed and rigorous look back at what going to the moves once meant—culturally, aesthetically, and architecturally—seems particularly urgent and apt. When Movies Were Theater offers digital -age moviegoers—screen watchers?—a fascinating and provocative study of the spaces in which we see movies. Thomas Doherty, author of Hollywood and Hitler, 1933-1939

When Movies Were Theater is a brilliantly argued, superbly researched study of the spaces and physical contexts that determine our experience of movies. Paul shows that the history of stage and screen has involved many architectural changes, and that the framing environment—whether indoors or out, whether at home or in a multiplex—decisively affects both the form of films and our understanding of them. His book is of groundbreaking importance and should be read by everyone with a serious interest in the ever-evolving medium of moving images. James Naremore, author of An Invention Without a Future: Essays on Cinema

When Movies Were Theater is an impressive achievement. William Paul demonstrates that the history of film should not – and cannot – be separated from the history of theatre, including the history of theatre buildings. A major accomplishment in research and analysis, Paul's book offers essential scholarship for both film scholars and theatre historians. Thomas Postlewait, author of The Cambridge Introduction to Theatre Historiography

In this fascinating study, Paul investigates the complex and ever-changing theatrical space of motion picture exhibition. He also offers his insights into the unexpected ways that these spaces influenced film production—and vice versa. Charles Musser, author The Emergence of Cinema: The American Screen to 1907

If you are interested in how the architecture within American movie houses shaped the cinema and vice-versa, William Paul's often brilliant tome is an instant classic. Gerald Peary, The Arts Fuse

This is a book that will change our thinking of cinema.... It is a broadening of our views on the history of cinema as a cultural practice at the crossroads of many different fields: theater, architecture, technology, economy, and art.... [When Movies Were Theater] deserves a place on the very top of all compulsory reading on the history of cinema. Jan Baetens, Leonardo Reviews

William Paul’s meticulously researched magnum opus ‘When Movies Were Theater: Architecture, Exhibition, and the Evolution of American Film’ can be added as a most important new member of this growing canon. Bruce Peter, Early Popular Visual Culture

When Movies Were Theater draws from a deep and broad body of archival sources to generate original, and occasionally surprising, arguments about the origins and development of the American film industry over its first forty years. . . . As an exhibition and industry history, then, Paul’s is a necessary and welcome addition to existing scholarship. To its great credit, When Movies Were Theater also happens to be interesting in its own right, outside of the academy. Paul’s arguments are carefully laid out, his organization is thoughtful and logical, and his descriptions of historical contexts, business relationships, and physical spaces are consistently clear. Leo Rubinkowski, The Velvet Light Trap

William Paul is professor of film and media studies at Washington University in St. Louis. He is also the author of Ernst Lubitsch's American Comedy (1983) and Laughing Screaming: Modern Hollywood Horror and Comedy (1994).