When the Future Came 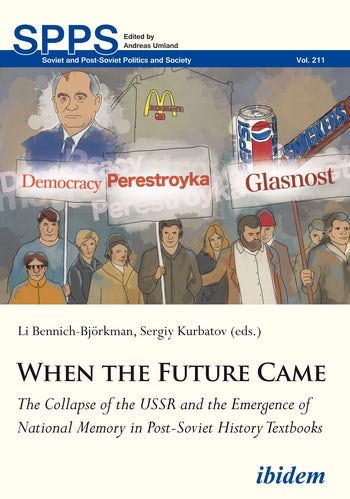 When the Future Came

This captivating volume brings together case studies drawn from four post-Soviet states—Russia, Ukraine, Belarus, and Moldova. The collected papers illustrate how the events that started in 1985 and brought down the USSR six years later led to the rise of fifteen successor states, with their own historicized collective memories. The volume’s analyses juxtapose history textbooks for secondary schools and universities and explore how they aim to create understandings as well as identities that are politically usable within their different contexts.

From this emerges a picture of multiple perestroika(s) and diverging development paths. Only in Ukraine—a country that recently experienced two popular uprisings, the Orange Revolution and the Revolution of Dignity—the people themselves are ascribed agency and the power to change their country. In the other three states, elites are, instead, presented as prime movers of society, as is historical determinism.

This is a fascinating study of how textbooks from various post-Soviet contexts portray and interpret Perestroika—the foundational event for contemporary Russia, Ukraine, Belarus, and Moldova. The authors skillfully address the panoply issues, central for understanding today’s regimes in these countries as well as differences among them. The book homes in on the problems of social change and continuity, legitimacy and resistance, people’s agency and conformism. Michail Suslov, Assistant Professor of Cross-Cultural and Regional Studies, University of Copenhagen

Dr. Li Bennich-Björkman is Johan Skytte Professor in Eloquence and Political Science at the University of Uppsala. A member of the Swedish Royal Academy of Arts and Sciences, she held visiting fellowships at the Swedish and Helsinki Collegiums for Advanced Study as well as University of California at Berkeley. Her previous books include, among others, Political Culture under Institutional Pressure (Palgrave Macmillan 2007) and Baltic Biographies at Historical Crossroads (Routledge 2012). Her papers have been published by, among other outlets, East European Politics and Societies, Nationalities Papers, Journal of Baltic Studies, East European Quarterly, East/West: Journal of Ukrainian Studies, Journal of Contemporary Central and Eastern Europe, and Higher Education Quarterly.

Dr. Sergiy Kurbatov is an Affiliated Researcher with the University of Uppsala, Senior Fellow at the National Academy of Educational Sciences of Ukraine in Kyiv, and Board Member of the Ukrainian Educational Research Association. Previously, he held visiting positions at Colorado State University and Brown University. His previous books include Istorychnyy chas yak determinanta tvorchoho protsesu (Informatsiiny systemy 2009) and Fenomen universytetu v konteksti chasovykh ta prostorovykh vyklykiv (Universytetska knyha 2014). His papers have been published by, among other outlets, Vyshcha osvita Ukrainy, Filosofiya osvity, International Review of Social Research, and Pedagogika Filozoficzna.